Mission Verde, Mayor Phil Hardberger’s ambitious vision for transforming Alamo City into an international renewable-energy leader, introduced itself to the city coffers for the first time last week, making off with a little more than $200,000.

Not a tremendous amount of money, but it signals the beginning of San Antonio’s fiscal entanglement with a vision built on a set of assumptions that, taken individually, would conflict with many residents’ conservative programming. Out of respect for these increasingly endangered Global Warming deniers, I won’t mention the bugaboos of greenhouse gases, climate change, and Peak Oil lurking behind Mission Verde.

Neither will the Mayor. Smart man.

Instead of offering the city a climate action plan to save the polar bears from iceberg-gobbling greenhouse gases, Mayor Hardberger genteelly informed residents at last month’s State of the City Address that “the world is changing.” He then proceeded to outline a range of ways the city can cash in on that global lurch toward the eradication of carbon emissions.

The bulk of last week’s initial Verde investment — $131,400, to be precise — covers more than half of the city’s share of an expected $250,000 contract between the City, CPS Energy, and global sustainability guru Jeremy Rifkin. While that bags the city a three-day seminar with Rifkin and his Round Table of the Very Smart culled from across the international green-energy sector, Verde boosters don’t know if that will leave city leaders with enough substantive direction to tackle Step One on their own.

For the 10-point, tomatillo-evoking Verde plan to succeed, the primary requirement is the decentralization of the city’s electrical infrastructure. Currently, electricity is generated at a handful of power plants and shot through power lines to millions of users. Decentralization, or “distributed” energy, seeks to replace those power plants by covering the city’s homes and businesses with mini power plants, including rooftop solar panels and backyard wind turbines.

If decentralized power is Verde’s first technical challenge, the mayor’s fight will be on the public-relations front. Those in his office know that to truly sell the public on the transition they need to make it pay — and quick.

Already a gap is opening on council that could ultimately engulf Verde.

Lourdes Galvan and John Clamp voted against bringing Rifkin to town. Sheila McNeil also voiced some displeasure before voting in favor of moving ahead.

And with a mayoral election taking place in just a few months, the Mayor’s advisors know that they have to demonstrate the project’s potential real-world benefits to prevent the next rack of deciders from sweeping it into the Land of Almost Was.

“If you get hired through a green-jobs initiative, well, you start connecting with Mission Verde,” said Laurence Doxey, the director of the City’s Office of Environmental Policy. “But right now it’s a concept, and, you know, ‘I’ll believe it when I see it.’”

Likely Hardberger and Company knew they had a sales job in front of them before the mayor unveiled his sustainability vision at last month’s State of the City Address and was greeted by more than a few vacant stares.

Though no scientific survey, an online poll hosted by KSAT suggests an early hole in the Mayor’s support. Of the 610 who responded, 67 percent said the city “shouldn’t be adding new, costly programs right now.” Only 33 percent agreed Verde will “create jobs and help the environment.”

For a plan that parallels the Obama Administration’s stimulus bill in its ambition for green energy and environmental programs, it should be no surprise that we are seeing a corresponding microcosmic echo in the political machinery here at home even as Obama is taken on by Republicans on the Hill.

Councilman Clamp told the Current that his objection hinges on the mayor’s failure to follow protocol in bringing Verde elements to a vote — that the Rifkin contract funds and another $88,000 for a green-jobs training program should have slogged through the economic-development committee before appearing before the full council.

“When the process can be bypassed, which is frequently done, I don’t take kindly to that,” Clamp said. “I’ve got `Council Consideration Requests` that haven’t even been looked at — for a year. They’re just hanging out there.”

Procedure is not the end-all of Clamp’s objections, however.

“Paying $250,000 for a three-day seminar is not the best use of our money at this point in time in our economy,” he says, before painting Rifkin “anti-biotech, anti-nuclear, anti-beef, anti-this, anti-that.”

It’s true. Rifkin is on record as strongly opposed to the expansion of nuclear power. He has also fought the expansion of biotechnology. Whether or not he breaks bread under a golden arch, I can’t say, though the restaurant, tobacco, and alcohol lobbies have spent a considerable amount of money smearing him through front groups such as the Center for Consumer Freedom. There is, however, something pleasingly ironic about a city with a pending application for two new nuclear power plants paying an anti-nuclear advocate to potentially refurbish its energy operations. (Hell, nuke-heavy France retained him, too.)

So, even in a flush economy it appears likely Clamp would have wound up in the “no” column for ideological reasons. Galvan, the other dissenting vote, could not be reached for comment before deadline.

Doxey admits that generally the response of those at the State of the City was somewhere between “stunned and wait and see,” and that the many promises of Verde are still seeking their buyers

“What it is going to take is a constant drip, drip, drip of more exposure to the pieces of the puzzle that sustainability and this Mission-Verde approach is trying to address,” Doxey said. “I think people have to connect with the pieces of it that personally they can relate to.”

The most popularly attractive aspects of Verde are its potential to deliver jobs and valuable weatherization dollars to city homeowners. Neither is an overnight undertaking. Doxey lets on that two renewable-energy-related manufacturing companies are talking to his office about locating in San Antonio. The proposed citywide weatherization program will first require a substantial pilot program to explore its financial viability.

Overall, Mission Verde is a pretty lean plan. From a taxpayer perspective, the $88,000 put into a green-jobs program last week will pay for itself if it creates only two or three local jobs. The bulk of the required money would come from capital-fund investors, federal stimulus funds, and private industry.

When it comes to green energy, faith in climate-change predictions isn’t required.

“It doesn’t really matter whether you believe it or not, this is what the policy people believe, and this is what’s coming,” said Victor Flatt, chair of environmental law at the University of Houston. “Even if there were no climate change, this makes sense. It makes economic sense because it provides jobs, it increases power efficiency, it helps lower bills — all of those things.”

Verde is an interlocking equation, and neither green jobs nor rehabbed housing will move forward in a convincing way if the decentralized utility model isn’t implemented.

Rifkin isn’t personally needed to put the plan into play; there are a lot of energy advisors out there. There aren’t, however, many who have held the ears of international leaders — international leaders preparing to rub our faces in foreign-made renewable-energy technology, it should be added. What better vehicle to get San Antonio on internationally competitive footing?

“He’s going to bring the world to us,” promises a close Verde advisor, “the world of sustainability.”

That may be, but early indications suggest Hardberger and Rifkin should be prepared to vault a few obstructionist bodies first. •

Homes as power plants? The San Antonio City Council is set to discuss proposals by the Mayor’s Sustainable Building Task Force at the February 11 B Session to improve the energy efficiency and solar readiness of new homes by ramping up city building codes. The Task Force’s proposal would institute increasingly strict standards until 2030, when every home built in the city would be carbon neutral. 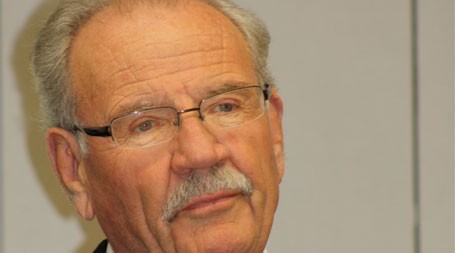 Who is Jeremy Rifkin?

Founder and president of the Foundation on Economic Trends, Jeremy Rifkin is an economic and energy advisor to a variety of national and supra-national (read: European Union) leaders. Among the best known of his 17 books are the Hydrogen Economy, the End of Work, and the Biotech Century.

According to the FET website, he holds a degree in economics from the Wharton School of the University of Pennsylvania, and a degree in international affairs from the Fletcher School of Law and Diplomacy at Tufts University.