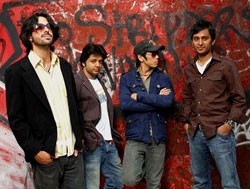 
Joseph King was a fixture on the Austin music scene for seven years with the band Canvas, but when he wanted to explore new rhythmic possibilities, he went to New York to do it. Deadbeat Darling, King’s current, Brooklyn-based band, excels at jagged, stutter-step, reggae-inflected material, such as “Brother Brother” and “Johnny,” two highlights from their 2007 EP Belle Epoch. In a sense, the band recalls an early post-punk period when bands such as Gang of Four, the Police, and The Members liberated rock from its four-four conventions.

King, a San Antonio native, returns to his home state for the Saints and Liars Tour, a four-stop Texas trek that begins at the White Rabbit on April 30. The concept behind the tour is to unite three close songwriter friends with Austin roots - King, Casey McPherson of Alpha Rev, and Johnny Goudie of the Little Champions - for a series of shows and see what happens. Expect plenty of syncopation and
introspection. 8pm Wed, Apr 30, $8, White Rabbit, 2410 N. St. Mary’s, (210) 737-2221,
sawhiterabbit.com.