Glitter Political: For Renée McElhaney, constitutional law is a piece of cake 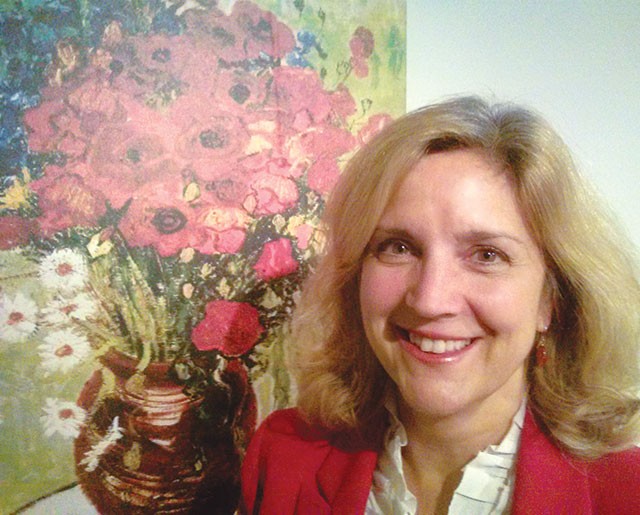 Renée McElhaney’s ability to “take really deep concepts of the law and turn them into something that a regular person can understand”—developed and mastered through her experience as a school teacher—has brought her a fair share of praise and criticism. In fact, she’s heard that some political chismoleros have branded her “a cheerleader.”

Maybe it’s the enthusiastic way she presided over the 73rd state District Court from 2010 to 2012. Her loudest cavilers could be misinterpreting a genuine zeal for the law and her belief in redemption for those who seek it.

“Calling me a cheerleader trivializes who I am,” says McElhaney, who faces Democratic rival Edna Elizondo in the race for the 150th state District Court this November.

McElhaney’s Monte Vista home is decorated in soft shades of blue, and the paintings on her den wall demonstrate a love of impressionism.

“I loved every single day of law school. I’m a huge law nerd,” she says. “I wake up at three o’clock in the morning and think about law.”

McElhaney, now 54, recalls one of those beloved days in Constitutional Law class at St. Mary’s University School of Law. The topic was the relationship between federal and state government. Her professor asked the class if the two entities were “melded” together.

“And I said, ‘To me, what federalism means is that there are these two clearly separate concepts [that] interact with each other in such a way that they make a whole. Albeit, each one is distinctively different and you can see it. The law, as a whole, is like a marble cake.

“When you look at a marble cake, you have the yellow and you have the chocolate. When you cut the cake and serve a slice [one can see] they are completely separate—but it’s one cake.’”

To her surprise, the professor completely dismissed her comment.

Were you the only woman in class? I ask.

Did anyone back you up?

Her voice drops an octave and a single eyebrow arches when she says, “No.”

But her willingness to stand behind her convictions has won her some game-changing attention.

Following the 2009 heart attack that claimed the life of her predecessor, Andy Mireles, McElhaney received an appointment to the bench by Governor Rick Perry. The appointment required final approval from her state senator. “It was Leticia Van de Putte who made me a judge,” she says, with what seems like a hint of indebtedness. McElhaney then dips her head with a grin when she realizes her faux pas.

She is, however, a “proud” Republican and she has high hopes of reclaiming the bench. “You see a lot of people who … when they lose their bench … never try again … ‘cause it’s really devastating. It was devastating for me,” she says.

McElhaney was raised in an Air Force family, living in such far-flung places as Germany and the Philippines, and attended 11 schools before her high-school graduation. She didn’t connect as much to places as “to the experience,”  she says—until at age 16 she arrived in San Antonio, where she felt an instant kinship with the city. It was here she would raise her now grown children.

Her adventures in law have not been without their twists and turns. In 2007, McElhaney was involved in a lawsuit filed by a former client. It’s still an open case, with a claim that remains “essentially against the law firm she worked with at the time and not her personally,” according to McElhaney’s attorney George Spencer.

For McElhaney, redemption is real. Case in point: She returned to that Con Law class the next day with a homemade marble cake for her professor and classmates. But before they could taste it, they had to hear her out.

“I cut it up and said, ‘Look at it. They’re intertwined. You can’t separate them but you can distinctively tell the difference between the two.’”

She crosses her arms with a puff of her lip, sits back in her chair and we return to the present.

A nerd with skillz.