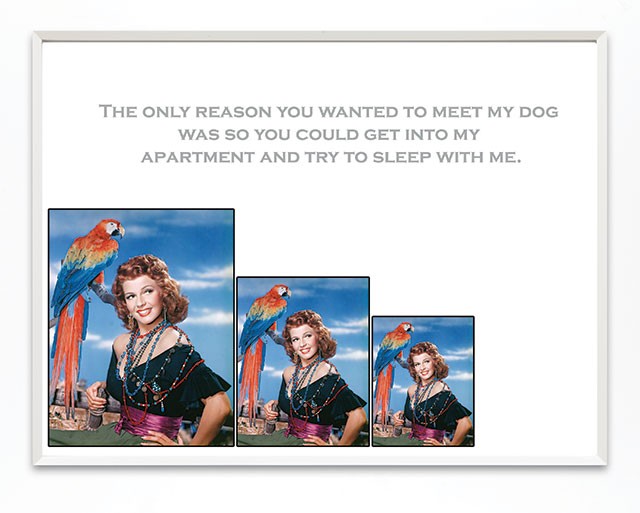 Courtesy
Allison Wade, The Only Reason...

The most impressive image in “Momentary Realities” at Cinnabar is one of the simplest. In August Muth’s Enfold, a three-dimensional yellow square floats about six inches in front of a blue-green background. You can pass your hand through the square, and you don’t need special glasses to see this large-scale, single-beam hologram.

Beam me up, Scotty, the future is now.

While 3D movies may not have proven to be the technological breakthrough theater owners have been hoping for, moviegoers realize the extra cost, the stupid glasses and the childish tricks to make the three-dimensional effect apparent haven’t conjured better movies.

But Muth’s holograms are sure to please Star Trek fans and anyone else wondering about the future of fine art photography in this age of instant digital gratification.

Muth has been working with holograms for three decades after studying art and physics at the University of New Mexico, the University of Houston and the University of Texas at Austin. His work is based on the pioneering technique developed by the Russian physicist Yuri Denisyuk, who produced the first reflection hologram in 1962. Through trial and error, Muth says he developed an even better technique to create much larger images in his Santa Fe studio.

Brilliant, shifting colors are another improvement over the earliest black-and-white holograms. Using simple geometric forms, Muth’s compositions shimmer and change with the viewer’s perspective. An orange circle appears to behave with a certain kind of sly intelligence in Sentient, along with a mischievous blue circle. Not only do forms appear to float in front of the picture plane, but behind it as well, creating an illusion of infinite depth, a window into another dimension.

Likewise, Austin artist Sally Weber will have you peering into the abyss with her holograms made with a different technique and placed on the floor with lights shining directly down at them. When you look over the edge of one of her boxes, the world falls away and you see monochromatic green, organic forms that magically spring up at you. In Flow, Spark and Connect, bizarre, translucent plants appear to be growing and twining in some weird, intergalactic plane with galaxies and stars spinning in distant space. She’s also showing giant scans of small objects with extreme clarity in witty juxtapositions, such as a bat, glass balls and a yellow flower in The Draw.

San Antonio artist Rodolfo Choperena sticks with two dimensions, but motion is a key to his flowing, abstract photographs. Seeking the “pure chroma” of color fields, landscapes and seascapes, the Mexico City native maneuvers the camera and plays with aperture and exposure settings to create dazzling streaks in strands of red, blue, green and gold that float across the picture plane like curling, colorful lines of smoke.

But “Momentary Realities” takes a conceptual turn with two artists who examine the false promises of the digital revolution through a feminist lens.

New York artist Anne Doran appropriates images from porn magazines, corporate reports, advertising circulars and military periodicals and then mounts the images on wavy-edged honeycomb aluminum wall reliefs, linking them with lines of metal to resemble complex thought balloons exploring the connections between male aggression, consumerism and sex. In Lush Life, a grainy black-and-white photo of a man’s hands pulling down a woman’s blouse to expose her breasts is linked to an old-school copier, a mechanical arm and a lighted window at night from a peeping tom’s point of view—suggesting the early days of privacy invasion before the internet made it so much easier.

Providing comic relief are Allison Wade’s photographs of break-up lines from the Twitterverse, including text messages that have ended the New York artist’s own relationships. Her one-liners are reminiscent of Jenny Holzer’s gnomic observations. But you don’t have to be a romance writer to imagine the stories that go with comments such as: “It appears that I am very low on your priority list,” “This is my last attempt to get in touch with you before I feel like a stalker,” “On Xanax. At the airport. Please stop calling me,” “Hey, sorry, I should have texted before I left. I’m in Costa Rica,” and “You’re free. Congratulations.”