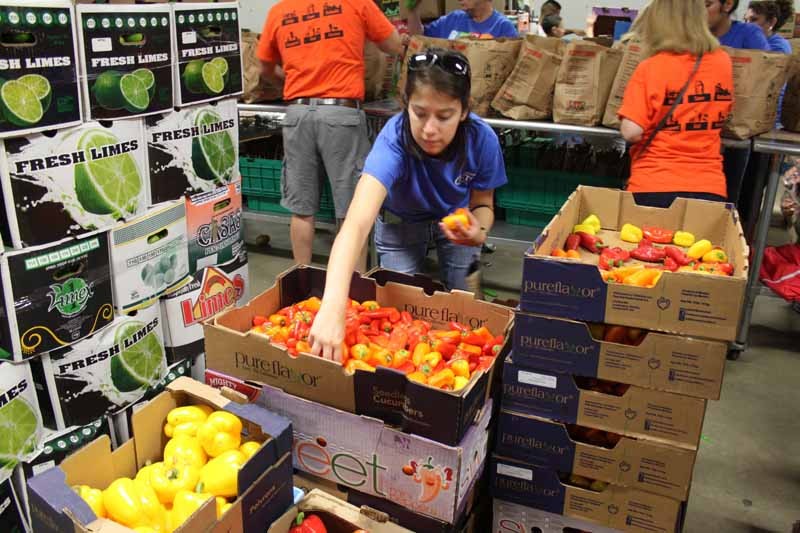 Cynthia Rodriguez, a stay-at-home mother of two who lives on the North Side, says she never thought she'd need help putting food on her family's table. But when her husband lost his air-conditioning contract job a few years ago, they couldn't pay their monthly car, mortgage and utility bills. Rodriguez said her family held yard sales and sold some of their belongings at flea markets before turning to the San Antonio Food Bank for assistance.

"We thought we were going to bounce back, but unfortunately it lasted longer than we expected," Rodriguez said.

Every week, the San Antonio Food Bank and its 500-plus partner agencies feed 58,000 people across a 16-county area that includes Bexar County and stretches north to Kerrville County, south to LaSalle, west to Uvalde, and east to Seguin.

Most families that visit food-pantry sites are underemployed or "just a paycheck or crisis away from not having food on the table," said the Food Bank's Eric Cooper. The outpouring of support that the food bank receives from generous donors in November and December helps shore up more hungry families during the holiday months, he said, but it's important to remember that hunger is a year-round problem.

"As we think of the holiday season, it's a time for giving and it's a time for getting involved ... it's a time of year that [the San Antonio Food Bank] gets a lot of support that will help those struggling families nourish their families and bring tradition to their households," he said. "In those months that don't have holidays, the need is still there."

More than 273,700 people in Bexar County were "food insecure" in 2012, meaning that they don't know where their next meal is coming from, according to data from Feeding America. That number translates to a rate of 15.9 percent, compared to a statewide rate of just more than 18 percent, according to the U.S Department of Agriculture. Among all 50 states, Texas has the third-highest rate of food insecurity. Celia Cole, CEO of Feeding Texas, points to the 2009 economic recession as the peak of food insecurity both nationwide and in Texas. But family finances have not kept pace with the economic recovery.

"Not much has changed even though we are supposedly two or three years into [an economic] recovery," she said. "We're still seeing the same persistent high rates of food insecurity, and people who are at the lower end of the economic ladder are still reeling and trying to recover."

Troublingly, a significant number of children, both in Texas and across the country, are without a consistent source of food. In Bexar County, more than 125,000, or about 1 in 4, children are food insecure. Cooper points to the high poverty rate in the area: More than 333,000 San Antonians live at or below the federal poverty line, which for a family of three means earning a household income of $19,760 annually. The median income in our county is $49,651. About two-thirds of the families that utilize the food bank's services earn incomes below the poverty line.

"There isn't really a season [for hunger] as much as an economic equation," Cooper said. "Hunger is a symptom of poverty and a lot of families that are underemployed or just a paycheck away from not having food on the table find themselves at our pantries and at our food bank."

Barely earning enough to cover basic expenses, families are sometimes forced to choose between food and other bills, Cooper said.

Annual data and client surveys released recently by Feeding America reveal that families visiting food banks and their partner organizations statewide face tough choices every month when it comes to meeting their most basic needs. For example, 68 percent of Texas households that sought help reported choosing between paying for food or paying for gas or transportation at least once in the previous 12 months, and about one-third are forced to make that choice monthly. A staggering 71 percent of food-bank clients had to choose between food and medicine at least once in the previous 12 months.

Cooper said that approximately 60 percent of the food bank's clients, like Rodriguez, also get help from these programs. To qualify for SNAP, a family of three, for example, must earn a net monthly income of $1,650 or less. In Texas, households that receive SNAP benefits get a slim $295 per month, and in Bexar County, not everyone who needs the help gets it. About 25 percent of eligible families don't participate in the program. So, along with distributing food and maintaining a community garden, the SAFB helps connect people with these types of assistance.

"You can't isolate one strategy [for helping hungry families] and think it's going to work," Cooper said. "We're constantly educating our clients, the families that we serve, about those federal programs."

SNAP recipients, though, are feeling a crunch after Congress ended the federal-stimulus program that had added $36 per month per family in benefits. While $36 might not sound like a lot, when the average monthly benefit for a Texas household is about $295, it's significant. On top of that cut, dubbed "the hunger cliff," congressional Republicans threatened to slash the program even more. The anti-hunger community, Cole said, ultimately prevented the additional cuts, but the upcoming Congress will soon take up the federal Child Nutrition Act, which funds programs like WIC, the school lunch and summer food programs for kids. With a Republican-controlled Senate and House, advocates are preparing for a fight.

"We are going to have people in positions of power who aren't supportive of SNAP or other nutrition programs. That's going to be a challenge," Cole said.

Families on limited budgets really feel the crunch during the holidays. Rodriguez remembers when she couldn't contribute to her family's Thanksgiving potluck dinner the year her husband was unemployed. Her husband now has a job and she is fulfilling her passion for baking, making and selling cakes and cookies from her home. Rodriguez says she now donates a turkey to the Food Bank every year.

"I think people feel it more during occasions like this, Thanksgiving and Christmas," she said. "I think it's more tender because as a mom, you want to be preparing a meal, to smell the aroma in your house, have your child smell cookies after school—it means a lot."