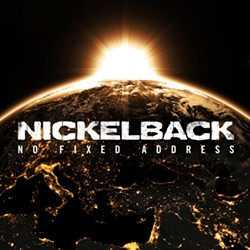 Nickelback’s eighth album No Fixed Address finds the Canadians not learning much from their past efforts. Everything is still here: gruff, forced vocals, simplistic power chords and misogynistic and macho lyrical content focused on partying, booze, drugs and more partying. Fans will rejoice about the ever-so-static Nickelback material, but there’s a new ingredient to add fuel to the nonbeliever’s fire: a duet with Flo Rida on the country crossover-twanged “Got Me Runnin’ Around.” The lead single “Edge of a Revolution” is ironic to say the least. The lines “No, we won’t give up, we won’t go away / ‘Cause we’re not about to live in this mass delusion,” sound like a parody when sung by corporate rock god Chad Kroeger. But, “We won’t go away” is one of the more vicious threats to spew from Kroeger’s lyric book. –Shannon Sweet