Will Lyft, Uber Make Good on Threat to Leave SA? 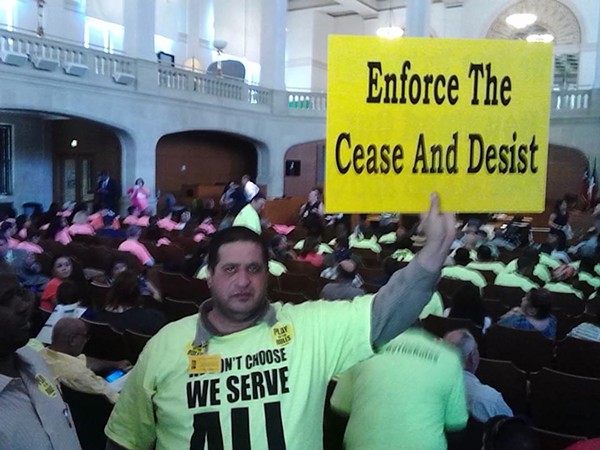 Mark Reagan
San Antonio City Council approved transportation network company regulations Thursday morning, to the delight of Alamo City cabbies. This photo is from a public safety committee meeting earlier this year.
Editor's note: This story has been updated to include a response from Lyft and Uber.

The regulations will take effect March 1. In the meantime, the cease-and-desist order to both companies (who are still operating, anyway) is in effect.

Last week, after a council work session, representatives with Lyft and Uber told us that they would likely leave San Antonio if the regulations were approved.

Well, the regulations were approved and we've reached out to our contacts at Lyft and Uber to ask when (or if) they are leaving.

Lyft spokeswoman Katie Dally didn't directly say whether Lyft would cease operations in San Antonio, but did urge the City to reconsider the regulations.

"Despite the common-sense recommendations made by the stakeholder task force, the ordinance passed by the City Council will make it nearly impossible for ridesharing to operate in San Antonio. Elements of the rules will place unnecessary, burdensome requirements on individual drivers without any benefit to public safety or consumer choice. Cities across the country, including Austin, have crafted rules that preserve Lyft's safe, affordable rides," Dally said in a statement.

Uber General Manager Leandre Johns said in a statement that the regulations are problematic, but indicated Uber hopes to work with the City Council between now and March 1, when they take effect.

"The ordinance passed by the San Antonio City Council is highly problematic and full of provisions designed to protect the taxi industry. While it opens up a regulatory framework for ridesharing, it is significantly more stringent than anything in the country. Several amendments were made to ease the driver barriers, but there is still work to be done in San Antonio. We hope to work with the City Council during the implementation period to improve the ordinance and determine if and how we can operate in San Antonio after March 1," Johns said.

However, if that doesn't happen, Johns said expect San Antonio Uber drivers to serve the Austin area rather than the Alamo City.

"We hope city officials remember how excited their constituents are about ridesharing and will work to transform today's ordinance into a bill that truly supports competition on the streets of San Antonio like their innovative neighbor, Austin. If we cannot fix the ordinance before March 1st and conclude that we are unable to operate under these regulations, all Uber partners in San Antonio will be able to drive and earn income in Austin," Johns said.

But the rules aren't exactly the same as the initial proposal, as District 3 Councilwoman Rebecca Viagran offered a number of amendments, which were accepted, during the meeting. Those amendments include nixing the physical and eye exam; providing that an out-of-state driver's license is sufficient for a student who is a ride-share driver; removing a requirement for a defensive driving test; and rather than having Lyft or Uber attest that a proposed driver has met all the qualifications in the permitting process, the driver would have to show up in person with all of the required documentation in order to get the $160 permit to operate.

And while the amendments might influence decisions by Lyft and Uber to stay in San Antonio, the amendments only partially address the two main concerns from the company: the permitting process and insurance requirements. Both Lyft and Uber have criticized insurance language that requires drivers to have primary insurance while the application is turned on, including $200,000 in excess coverage that is required when the ride-share driver doesn't have a passenger.

Only District 8 Councilman Ron Nirenberg and District 4 Councilman Rey Saldaña voted against the regulations, imploring the Council to delay the vote in order to better understand and explore the amendments Viagran offered at the last minute.

"I was just handed this, literally, 20 minutes ago," Nirenberg said of the amendments.

Saldaña, who wants Lyft and Uber to operate in San Antonio, said he hoped that the Alamo City would "not be an outlier among cities in the state or country with the most restrictive policy."

As soon as we hear back from Uber and Lyft about whether they plan to leave San Antonio because of the vote, we'll update this blog.