By Emma Platoff, The Texas Tribune 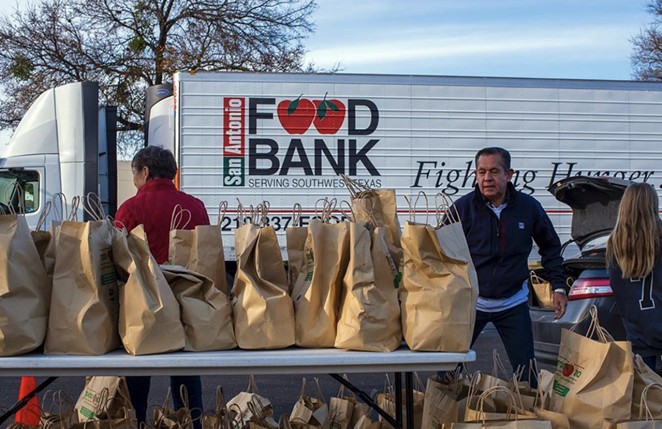 As summer approaches with no cure for the virus and Texas businesses reopen to diminished profits, many of the threads in that makeshift safety net are being snipped.

The dead top 1,600; the jobless exceed 2 million. The state craves a return to normal.

But the ongoing human and economic trauma has touched off a debate between those who believe the pandemic is disrupting a sustainable economic order and those who think it clarifies the fault lines in the system.

We’ve already seen that the institutional framework works — look how low the unemployment rate was before this,” said Vance Ginn, who recently rejoined the conservative Texas Public Policy Foundation as chief economist after a stint in the Trump administration. “I don’t think we’ll see Texans change their mentality of independence. ... I hope we would head in the direction of more markets and not more government.”

Others, largely on the left, say the coronavirus’ economic fallout shows that Texans need more support from their government, including expanded health care benefits and protections like paid sick leave.

“Texas, with all of its success and all of the wealth, was in a situation where it had at least the perception that its affluence allowed it to look away from certain things, to ignore certain types of issues and problems,” said Kirk Watson, a longtime Democrat in the Texas Senate who now serves as founding dean of the University of Houston’s Hobby School of Public Affairs. “Now we have gone through an enormous economic shock. That economic shock put a real light on the fact that there were weaknesses in that system.”

'The Best Thing We Can Do Is Continue to Open Up'

It was mid-March when Texas marked its first coronavirus-related death, and the cancellation of major events like Austin’s SXSW Festival and the Houston Rodeo hinted of mounting economic damage.

On March 13, Gov. Greg Abbott declared a statewide emergency. Within the week, the Texas Supreme Court halted evictions, and the Texas Workforce Commission waived the requirement that people be actively seeking work to receive unemployment benefits. By the end of the month, the Public Utility Commission banned residential utility shutoffs in the markets it regulates and the TWC announced it would distribute an additional $40 million to fund child care. And the U.S. Congress passed the CARES Act, which expanded eligibility for unemployment benefits, in addition to sending anyone earning less than $99,000 annually a check of up to $1,200.

The temporary public benefits were a welcome surprise in a state as parsimonious as Texas. Still, the needs outstripped the new support systems. At the TWC, phone lines were jammed and servers swamped. The state has now marked its highestunemployment rate on record, 12.8%.

And some things never changed. On health care, Texas remained opposed to expanding Medicaid, and the state that has long boasted the highest rate of uninsured residents will add an estimated 1 million more. Texas’ eligibility requirements for Medicaid remain the strictest in the country.

Though the state made it logistically easier to receive federal aid to buy groceries through the Supplemental Nutrition Assistance Program — axing an interview requirement, for example — it did not expand eligibility. That means that even Texans with no income could be ineligible if they owned any valuable assets, like a $15,000 car. In April 2020, 417,468 Texans applied for federal aid to buy groceries — more than three times as many as applied in April 2019.

Eviction proceedings have resumed, enough that legal aid attorneys anticipate a crush of work. Debt collections can start again, freezing struggling Texans’ bank accounts. Extra child care subsidies offered to struggling families at the start of the pandemic will be discontinued. And those who are out of work will again have to prove they are searching for a job in a dangerous new world in order to receive unemployment benefits, though the state has not yet confirmed a timeline.

As businesses reopen at limited capacity, state leaders say getting struggling Texans back to work is the most important strategy. Asked about individuals who lost their health insurance when they lost their jobs, Abbott has said the best way to help is to return them to the workforce.

“The best thing we can do is to continue to open up,” Abbott said at a recent press conference.

Others counter that an economy that’s still in recovery itself can’t support the millions of Texans who continue to struggle.

There’s a “presumption that well, we’re allowing businesses to be open, so these things no longer need to be in place,” said Jonathan Lewis, an analyst with Every Texan, the liberal-leaning Austin think tank formerly known as the Center for Public Policy Priorities.

“I don’t think now is the time to start reducing the response. If anything it’s time to keep thinking about how we can go further in this,” he said. “If we’re not thoughtful about how we respond to the needs of Texans right now, we’re only going to end up making our problems worse in the long run.”

"The Hard Issues That We Face"

Advocates are particularly concerned about evictions.

The Texas Supreme Court halted evictions during the height of shelter-at-home orders, but allowed them to resume in late May as the economy reopened in stages. Chief Justice Nathan Hecht told the Austin-American Statesman that “the pandemic hit like a tornado, and we thought a statewide standstill would allow landlords and tenants to stop and take a breath.”

“But the state’s trying to reopen,” he said, “and we’re all going to have to deal fully with the hard issues that we face.”

As is so often the case in Texas, social supports differ across the state. Certain cities, like Dallas and Austin, created their own eviction protections, and federal law protects many tenants through August.

That still leaves Texans like Phoenix Morgaine, whose landlord put a “for rent” sign in the yard of her Belton home even before evictions could legally proceed, afraid of being dragged into court and forced to sleep in their cars.

Some cities have offered limited rental assistance programs, but those funds dried up quickly and no statewide alternative has materialized.

The utility shutoff protections Texas imposed were also a patchwork from the start. Slated to last six months, those protections have already been clipped, and now are only guaranteed through mid-June. But many Texans were never protected anyway, because the state agency doesn’t regulate all electricity or water providers.

Amy Allen, who works in property management, was shocked when Hawley Water Supply, just north of Abilene, shut off her water during the pandemic. Her company hadn’t been evicting tenants; she hadn’t realized anyone would take such drastic action during times as difficult as these.

“I called and I said, ‘So how are you legally able to do this?’” she said. “Do they answer to anyone?”

She and her husband, a self-employed diesel mechanic who has struggled to find work over the last few months, scraped together $140 in cash, and he drove 15 miles to pay the bill in person.

“Thank God for the stimulus check,” she said.

Federal dollars have been the driver of many of the supports Texas has offered residents during the past few months. But in some cases, the state has left money on the table. That’s the case with Medicaid expansion, which even with a generous federal match has remained politically impossible in Texas.

Another federally funded support program was child care, a system advocates say was already disastrous before the pandemic hit. On June 1, the state will stop covering child-care costs that low-income parents pay under typical circumstances, and child-care subsidies for essential workers will be phased out over the next three months. The TWC announced both moves the day after Abbott reopened child care facilities for all parents.

Removing these supports offered “early indicators that we will follow the path of least resistance,” Watson said. But the state, he argued, has an unprecedented opportunity to reevaluate what works and doesn’t in its economy.

“We cannot squander this opportunity,” he said. “Shame on us — shame on us — if we set aside the revelation of our best sides and our best values to fix flaws in a system that proved not to be as resilient as we thought it might be — and then we just went back.”

Disclosure: The Texas Public Policy Foundation, University of Houston and Every Texan (formerly the Center for Public Policy Priorities) have been financial supporters of The Texas Tribune, a nonprofit, nonpartisan news organization that is funded in part by donations from members, foundations and corporate sponsors. Financial supporters play no role in the Tribune's journalism. Find a complete list of them here.