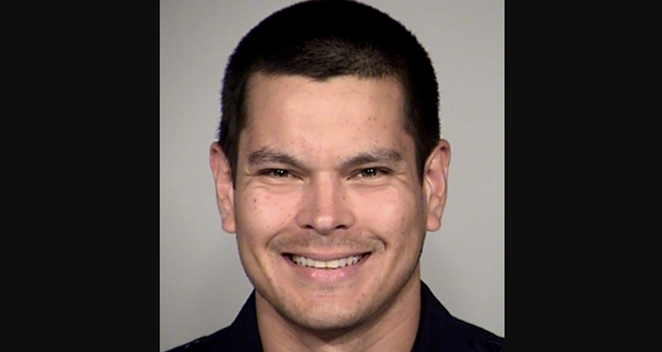 An arbitrator has upheld the second firing of Matthew Luckhurst, the San Antonio bike cop who beat an earlier termination for trying to give a sandwich filled with dog feces to a homeless man.

The San Antonio Police Department officer drew international headlines in March 2019 when a another third-party arbitrator returned him to work after the shit sandwich incident.

However, Luckhurst received a second indefinite suspension after a separate investigation found that he left an unflushed turd in a women's restroom at a downtown police station and smeared a brown substance on the the toilet seat after a female officer requested that the restroom be kept clean.

This week, an arbitrator upheld that second firing.

“This individual clearly has no business wearing an SAPD uniform, and it should never have been this hard to fire him,” San Antonio City Manager Erik Walsh said in a statement. “I am pleased that this is behind us, but the contract provision that gave him more chances than he deserved remains an obstacle to the Chief’s ability to discipline officers who fail to live up to SAPD’s standards.”

Luckhurst's ability to dispute the firings is enshrined in the police union's collective bargaining agreement with the city. Activists have called for revisions to the contract, saying it's allowed two-thirds of fired SA cops to return to the job.

“For both the department and the community, it was critically important that he not be allowed to have his job back," said SAPD Chief William McManus said. "Although the limits imposed on me by the collective bargaining agreement made firing him more difficult than it should have been, justice was finally served in this case.”