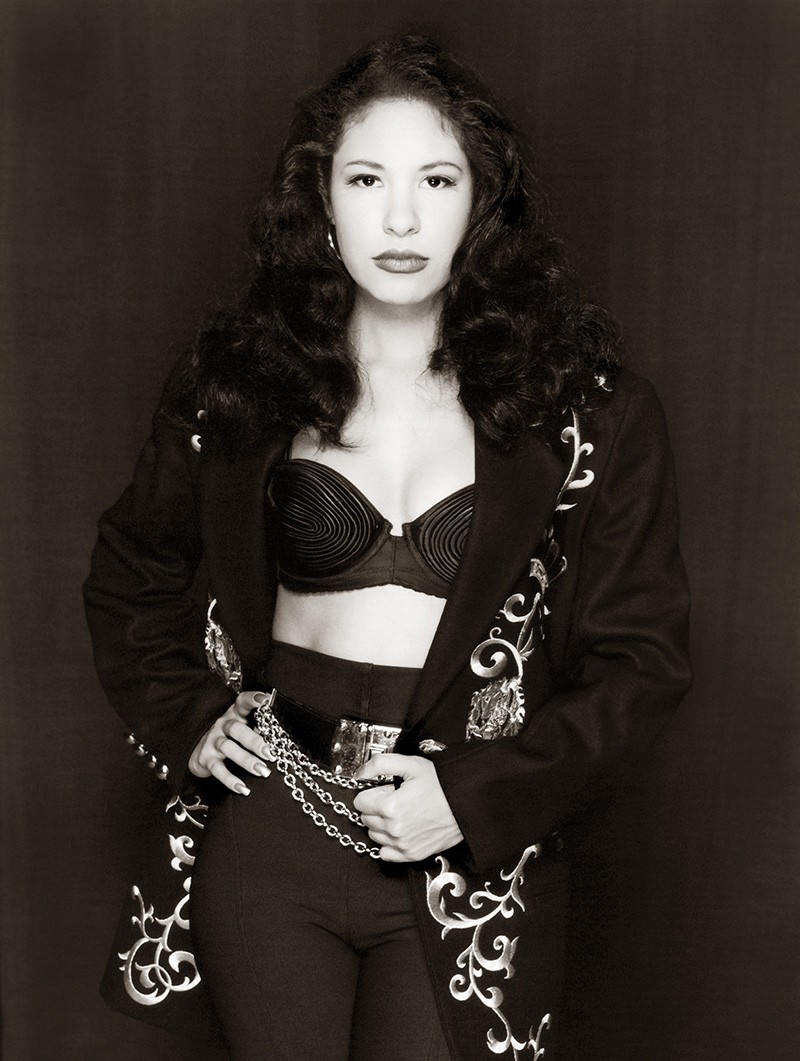 In a blue and gold veil borrowed from the Virgin Mary, San Antonio artist Ray Scarborough's vision of Selena Quintanilla may be the most forthright worship we have of the madonna of Tejano pop. Since her death two decades ago, the commemorative tone for Selena throughout South Texas has been one of uncompromised reverence.

Post street art of the singer and there's never a worry about tagging or removal by the property owner. Staple a tribute gig poster with her smile in Chanel Brick and the bill is stolen in no time, likely relocated to a safe frame at the thief's home. As Scarborough's portrait suggests, South Texas' treatment of Selena borders on the religious.

"People do see her as a religious icon," Scarborough told the San Antonio Current. "Not necessarily that they pray to her, but that in the admiration for her, that she was a saint."

For Selena followers, Corpus Christi and San Antonio are the respective Mecca and Medina of this pop culture devotion — where the singer grew up and where she launched her campaign for national attention. As the world's Tejano music capital, San Antonio offered pivotal momentum for Selena as she cleaned up at the Tejano Music Awards between 1986 and 1997, amassing 36 in her career.

Even though it has been 20 years since Selena Fan Club president Yolanda Saldívar murdered her, the singer's iconographic presence is still felt all over San Antonio. In death, SA mourned her with the pain of a close friend and the pride of a cultural figure, lighters up, blasting "Dreaming of You."

In the deep library of karaoke machines, the material from Selena's Amor Prohibido and Dreaming of You albums elicit some of the strongest responses. And for good reason.

Without the arresting melodies and addicting cumbia rhythms of those two albums that sent her into the pop stratosphere, her legacy may not have held on with such a tight grip for so long.

Released in 1994, Amor Prohibido contains almost every one of Selena's best-known tunes. The buoyant title cut, the overwhelming sadness of "No Me Queda Mas," the four-on-the-floor smash "El Chico del Apartamento 512," the hip-hop touches of "Techno Cumbia" and the fluttering-heart patterns of "Bidi Bidi Bom Bom" — Amor Prohibido is the desert island album for Selena fans.

The overlooked hero of Selena's music is her older brother, A.B. Quintanilla. The producer of her five solo albums, A.B. established the tone for her crossover from straight Tejano into pop. Sure, some of the keyboard settings sound cheesy in time; a contemporary producer using A.B.'s orchestra hits and Daytime TV horns would be like wearing M.C. Hammer pants now.

But A.B. did wield a timeless ear for arrangement. Cumbia patterns and Tex-Mex upbeats repeat on lock, providing a strong background for dancing. At key points in the melody, he boosts Selena's voice with harmony on keys and background vocals. And countermelodies flutter around like grackles in the springtime. Songs like "El Chico del Apartamento 512" are occupied with horns and keyboard tenants, but never feel overcrowded.

"When you listen to a Selena song these days, like 'Amor Prohibido,' it still sounds like it was recorded yesterday," A.B. Quintanilla told Noche Latina in 2010. This infectious production — a touch of corny syrup, but universally fun — helped Selena's music pervade car stereos and party soundtracks in the '90s.

The Quintanilla family did not respond to the San Antonio Current's requests for comment.

"I grew up with it in the household," Nina Diaz, singer of SA's Girl in a Coma, told the San Antonio Current. "I remember being really young and having Selena contests with my friends who would sleep over."

While Selena's music seeped into life in South Texas, female performers around the country began paying attention as she created a bona fide crossover phenomenon. Beyoncé, J-Lo, Shakira and Katy Perry all cite her as an inspiration.

"Definitely growing up in Texas, I heard her on the radio," Beyoncé told MTV tr3s in 2007. "And listening to her album, even though I didn't actually know what she was singing, it helped me in the studio with my pronunciation."

Selena continues to have influence over other known and up-and-coming performers. Born in 1992 near Dallas, Disney bopper Selena Gomez, now a pop star of her own, was named after the queen of Tejano (during Selena's 1991-1995 reign, her name skyrocketed from 780 to 91 in the rankings of most popular baby names in America). Casual onstage and confident with her hips in rhythm, Selena's comfortable and commanding presentation made thousands of little girls aspire to be just like her.

"She was one of the first to wear those outfits for full-figured women," said Diaz. "Me, being a Latina with a big butt, watching her dance around and be comfortable with her body, it makes me feel more comfortable with my body."

But it wasn't just Selena's musical chops that had a lasting impact on her legion of fans. Perhaps even more influential was her contagious no-fronts, down-to-earth demeanor.

"She was such a sweet, humble person," Diaz said. "That's something that follows her as well, not just her music, but her as a person."