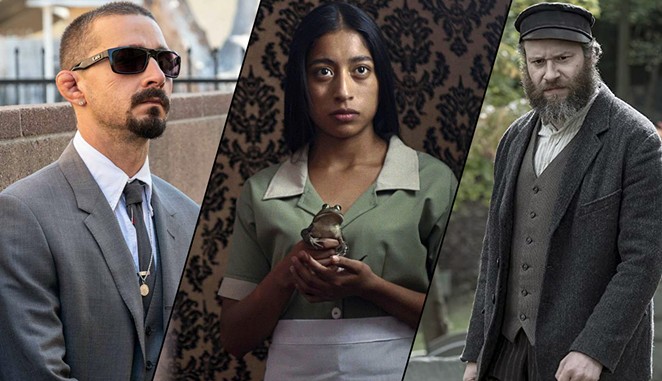 Despite its tangy name, An American Pickle is not the movie opening this week that will leave a sour taste in your mouth. Read below to see which of the three films we reviewed this week is one of the worst of the year. We also reviewed one of the best.

Actor Seth Rogen (Pineapple Express) pulls double duty as a pair of long-lost relatives in An American Pickle, a sweet yet only slightly satisfying comedy that doesn’t let its nonsensical ideas get in the way of a few smile-worthy gags. Making his feature filmmaking debut as a solo director is Brandon Trost, who is best known as a cinematographer for comedies like Neighbors and MacGruber. An American Pickle begins with an introduction to Herschel Greenbaum (Rogen), a Yiddish-speaking immigrant who comes to New York City near the turn of the 20th century to seek happiness for him and his new wife. When he accidentally falls into a vat of pickles at the pickle factory he works, Herschel ends up preserved by the brine for an entire century until he resurfaces unaged to find out he has a great-grandson, Ben (also Rogen, but without a beard), living in Brooklyn. Their reunion takes a hit, however, when Herschel ruins an important project Ben has been working on for five long years. At odds with one another, Herschel decides to venture out and start his own pickle empire as Ben devises ways he can sabotage his great-grandfather’s newfound fame. Adapted by Saturday Night Live sketch writer Simon Rich from his own novella, An American Pickle is funniest when Rogen’s Herschel outshines Rogen’s Ben by performing some of the less obvious fish-out-of-water jokes a comedy like this would demand. For example, learning how gadgets function is loads of fun when the gadget is a SodaStream, but not so much when it’s an iPad. Along with all the satirical elements Rich fashions together, he tries to tap into the sentimental sides of Rogen’s characters by showing the differences in lifestyle and religion between an old-world Jewish man and a modern Jew who makes a living developing iPhone apps and doesn’t pray. Maybe if it had stayed in the brine a little longer, An American Pickle might've emerged with more flavor. An American Pickle is currently available on HBO Max. 2.5 out of 5 stars (not recommended)

From the 1960 Mexican horror movie La Llorona to last year’s lifeless The Curse of La Llorona, a spin-off from The Conjuring universe, the story of La Llorona has been retold countless of times in films and TV shows, but never very convincingly — until now. In Jayro Bustamante's version, the Guatemalan writer and director tells the story of the iconic weeping woman through a political drama that follows a retired Guatemalan dictator, General Enrique Monteverde (Julio Diaz), found guilty of the genocide of tens of thousands of native lxil Mayan people during the early 1980s. When his guilty verdict is overturned and he is set free, General Monteverde is driven into his home as protests against his release rage on just outside his house. When Alma (María Mercedes Coroy), a young native servant, arrives to his front door after most of his domestic staff quits, she brings with her a supernatural force that makes the general and his family confront the unimaginable sins he committed decades prior. To call Bustamante’s La Llorona the best La Llorona movie ever made is an understatement. The unique, slow-burning, political horror/thriller he has created is ominous, atmospheric and never reduces itself to cheap scare tactics. While some viewers might not consider this a true La Llorona film since the folklore is only used to support the larger narrative, there is no doubt Bustamante has tapped into something that brims with cultural significance and dread. Read our interview with filmmaker Jayro Bustamante. La Llorona is currently available on Shudder. 4 out of 5 stars (highly recommended)

Ignore any controversy you may have heard about actor Shia LaBeouf (Honey Boy) playing a Mexican gang banger in David Ayer’s crime drama. Firstly, it’s not true. LaBeouf portrays a white man who grew up his entire life surrounded by the Chicano culture and, therefore, has adopted its dialect and characteristics. Secondly, LaBeouf’s character’s ethnicity is the least of The Tax Collector’s problems. As a writer and director for 20 years, Ayer continues his streak of writing insubstantial Latino characters. From the exaggerated homies in Training Day to the stereotypical drug dealers in Harsh Times, his depictions of Latinos on screen, apart from Michael Peña’s formidable character in End of Watch, have been one dimensional at best. In the film, Bobby Soto (TV’s Narcos: Mexico) plays David, a husband, father and one of two “tax collectors” whose job it is to collect money from local gangs for their imprisoned crime boss. The other is Creeper (LaBeouf), the main enforcer who instills fear into gang members who are short on their payments. When a rival returns to their gang-infested streets of South Central Los Angeles to resume power, David is forced to find a way to stop him from overtaking their turf and to keep his family safe from the enemies who want him to suffer. Aside from the natural curiosity that LaBeouf’s role provokes, The Tax Collector delivers nothing more than a tacky and unintelligent narrative that exists only to puff its chest and prove that not all Latino roles in Hollywood are created equally. It’s a nearly Peppermint-level cinematic failure. A portion of this review ran previously at Remezcla.com. The Tax Collector opens at local theaters, including Santikos Casa Blanca and Santikos Palladium, and on VOD platforms August 7. 1 out of 5 stars (not recommended)