What Else Is In The Teaches Of Peaches

Courtesy
Peaches spraying the crowd with fake blood in Brooklyn in 2009.

For electroclash and performance artist Peaches, the body and all its politics — gender, orientation, sexual identity — are there to be toyed with.

Playing rough with taboo, a Peaches show cuts through the doublespeak of sexual politics and gets into something real and vividly fun. For her Seussian costumes, raving fanbase and fearless attitude toward the body, I can think of no better candidate than this Toronto romp-roller for a hardcover photo tome.

What Else Is In The Teaches Of Peaches takes its name from "Fuck The Pain Away," a Peaches single featured in Lost In Translation and Jackass (an inspired club in Brighton, England, also took the title as its name). Like the '00 single, the book is full of grit, sweat and dripping sexuality.

Shot by Holger Talinski, a young photographer out of Berlin, Teaches of Peaches covers a prolific 2009 to 2014 span in the singer's career. From stressed out hotel shots to carnival stage shows, a performance of Yoko Ono's Cut Piece to a one-woman electro-rock opera Peaches Does Herself, the book is an extensive look into the life of a transgressive master.

What Else Is In The Teaches Of Peaches opens with an image of the artist backstage. In a pink-puff, upside down tulip jacket, gold hood and luchador mask, Peaches is utterly serious, prepared for the battle ahead. A few pages later, we find her in the same outfit, knee-high combat boots visible now, as she crowdsurfs with her legs splayed out like a goal post. Way deep in the crowd, Talinski's light travels from pink to green in the frame.

Peaches, née Merrill Nisker, has been at it since 1995, releasing five efforts of brilliant, electronic smut. But her material finds its true life on the stage, in no small part due to her elaborate, ever-evolving attire.

As Peaches describes her I Feel Cream tour in the foreword: "Images of myself singing backup were projected onto my winged sleeves when I lifted my arms. There were costume changes galore where I would start with huge outfits and slowly, during the show, strip down layer by layer like a Russian matryoshka doll." 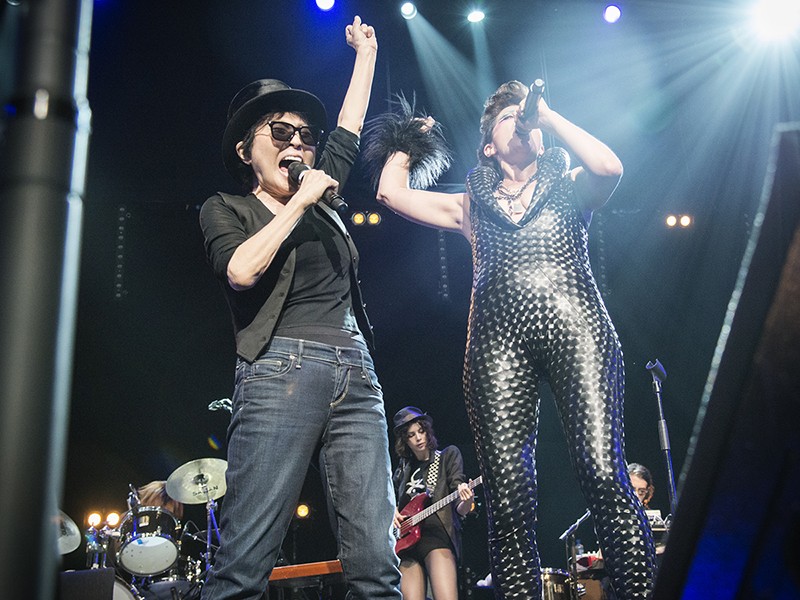 In her costume choices, Peaches shares Bakhtin's love of the orifice, worshipping at the spewing altars of the body. Another backstage shot finds Peaches in an off-white bodysuit with chrome breasts and a comic satyr phallus. The prosthetic shlong casts a perfect, laughable shadow on the industrial equipment behind her. In front of a massive outdoor festival crowd, Peaches and her dancers don huge, balloon-shaped breasts. Peaches, in a giraffe mask, is covered in 30 of the carnival mammaries.

Inevitably, the music morphed into performance and theatrical art. In 2012, after running Peaches Christ Superstar, a one-woman adaptation of Jesus Christ Superstar, Nisker debuted Peaches Does Herself, a mythical history of her roots. Talinski captures both shows in their absurd, gutbucket splendor.

Like all good performance art, it's not an empty dance. In each frame, Peaches carries a fire in her eyes. As R.E.M.'s Michael Stipe says, in one of the book's guest essays: "She is brave enough to be completely current, human, vulnerable."

In 2013, at the Meltdown Festival in London, Yoko Ono invited Peaches to perform Ono's Cut Piece. First performed by Ono in 1964, the work invites audience members to cut away the actor's clothing until nothing remains. In Talinski's Cut Piece photos, Peaches is left naked against a black background, with remnant scraps of clothing dotted around her.

"She sat quietly but her body was expressing a universe," writes Ono. "Cut Piece will never be performed again with such eloquence."

In front of the camera, a few more celebrities make their way into Teaches of Peaches. Nisker and Iggy Pop share a candid moment, in which The Idiot shows off his suspiciously white teeth (they're certainly looking a lot nicer than his 1981 shoot with Robert Mapplethorpe). In a stairwell, Peaches struts with Pussy Riot, the controversial protest-punk Russian outfit undoubtedly informed by Peaches' daring feminism.

A crucial figure in music in the new millennium, Peaches' greatest influence is in her role as a queer performer. A Peaches show is a space of sexual freedom, where taboos are looked in the eyes and crumble in the gaze of electro-rock 'n' roll.

"For a 16-year-old gay person, she offered something that I could not find elsewhere," writes Ellen Page, in the book's best essay. "A voice that said, Fuck shame, fuck the male-dominated perspectives of sex, fuck gender stereotypes, fuck not embracing your desires and fuck not owning yourself."

What Else Is In The Teaches Of Peaches