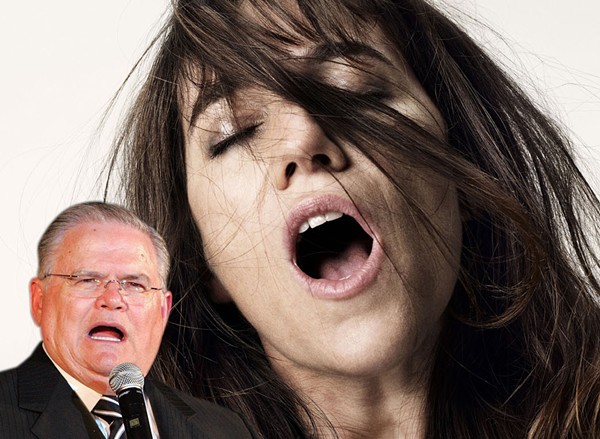 Eli Miller
It was too good to be true.
You may have heard a story making the rounds in which John Hagee, San Antonio's chief profiteer for Jesus, admonished women for taking the Lord's name in vain while in the throes of coital ecstasy.

"If you’re asking about my personal opinion, there is no greater sin in terms of wrongly using God’s name than women who use it during sex. That is one of the filthiest, most derogatory and sinful uses of the Lord’s name I can think of. If it were up to me, I would put every single woman or girl who does that in jail. That would be a fine example of God’s wrath aimed at what is, in my opinion, a terrible misuse of our Maker’s good name.”


"Oh, God," you might be thinking to yourself. "Did he actually say that?"

As amazingly ludicrous as that sounds, it's simply not true. The story originated on the news "parody" site newslo.com. (We use the term "parody" loosely.)

We here at the San Antonio Current do like to poke fun at the Cornerstone pastor from time to time, but it would be unfair to delight in something he didn't actually say.

Chastising women for their non-chaste Lord's-name-in-vain taking does sound like something Hagee would do. The story was believable enough to be a roundtable discussion on the daytime talk show The View.

"The story is a complete fabrication. It's written by a website that makes up these kind of stories in an effort to be humorous. All media outlets that have picked up this story have been contacted by John Hagee Ministries and will issue a retraction or face legal action."


Sure, we can make light of something crazy Hagee didn't say. But why do that when there is a wealth of actual gems from the Cornerstone pastor.

Here are eight obfuscations and flat-out crazy statements made by San Antonio's most famous religious leader.

"There are grounds to say that judgment has already begun, because he, the president, has been fighting to divide Jerusalem for years now."

On That Anti-Semite Barack Obama (November 2014)

"The executive branch … is in the hands of one of the most anti-Semitic presidents in the history of the United States of America.”

Hagee made these remarks to the Zionist Organization of America when the group presented him and Sen. Ted Cruz with an award for their support for Israel. He was responding to the U.S. negotiations with Iran over the latter country's nuclear proliferation.

From his book Jerusalem Countdown:

"[The Antichrist] will be the head of the European Union."

He also wrote that Jerusalem will be awash in a sea of blood during the final battle. Even Sen. John McCain distanced himself from Hagee after the book was published. Hagee really has a hard-on for the Armageddon, but there's no word on his thoughts on the 1998 movie.

“'I’ll bless those that bless you and I’ll curse those that curse you' ... That’s God’s foreign policy statement, and it has not changed.”

This statement would not be controversial if God Almighty were American, a fact that's inconclusive at this point. He made these remarks at last year's Christians United For Israel Conference, which Slate described as "the most insanely pro-Israel meeting you can ever attend." We're sorry we missed it.

"Before 1945 closets were for clothes not for strange people to come out of.”

Hagee is not a fan of sodomy. The line got a huge laugh and applause from Cornerstone congregants. He called for a constitutional amendment to deny marriage equality to millions of gay and lesbian Americans.

"Christians don't steal or lie. They don't get divorced or have abortions."

The line is reportedly from "The Fish Gate" sermon which can be purchased from "Rebuilding The Gates" DVD series.

Well, guess what? Did you know John Hagee is divorced? He founded Cornerstone Church after divorcing his first wife, Martha Downing in 1975. The divorce was quite the scandal for congregants of Trinity Church, where he was minister at the time. He then remarried, getting hitched to Diana Castro, who was a congregant at Trinity and is still his current wife.

"Women are only meant to be mothers and bear children ... Childless marriage equals dead, poison, empty."

Sorry if God made you barren, ladies! The quote is from a sermon titled "What God Wants In A Woman."

"Do I think the four blood moons is a messenger of a coming storm?" he asked. "Absolutely. History repeats itself. And also, in this September, the shemitah year is ending ... 2015 is a shemitah year. September 28 is the fourth blood moon in this shemitah year. I believe, in the fall of this year, America and the world will face another economic crisis, perhaps as a result of war in the Middle East or an economic crash. But there are very sophisticated people on Wall Street saying we are facing a 50 percent correction in the stock market in the near future. Get ready. Americans should get prepared":

Hagee is promoting his latest Apocalypse-mongering book, Four Blood Moons: Something is About to Change. If you want the Cliff Notes version, basically, we are all going to go broke and die in a rain of hellfire, similar to the rain and hellfire he predicted in his 2007 book Jerusalem Countdown that never happened. Hagee stated that lunar eclipses that have occurred on Jewish feast days are a sign that "something dramatic [will] happen in the Middle East involving Israel that will change the course of history in the Middle East and impact the whole world."

There's just one problem, the lunar eclipses he references to support his Four Blood Moons theory were not visible in Israel. Science, man. It ruins everything.


If you are too lazy to read up on Hagee's Four Blood Moons theory, don't worry. Just buy the DVD.