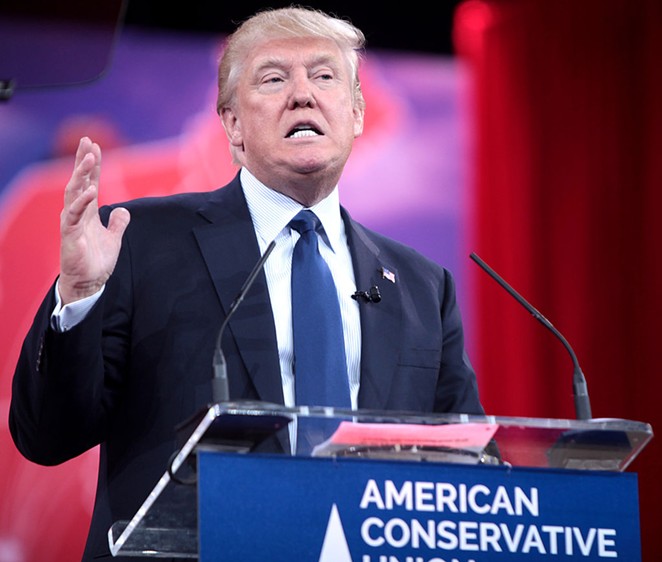 Wikimedia Commons
Feeling like your life has been trumped lately by a certain egomaniacal baboon who actually thinks he's going to become our next president?

Getting kinda tiring to be writing about La Trompa, to be honest. He's like that annoying fly that just won't go away. You ignore it, thinking it has finally – thankfully – moved on but guess what, it's still right there buzzing around your friggin' ear.

But now some say he's gone too far. Or, at least, that he's responsible for things going too far.

Talking about his anti-immigrant rhetoric stoking the fire for ultra-xenophobes – white supremacists seeing in Trump nothing short of a potential messiah.

According to the country's leading organization keeping track of hate groups, the Alabama-based Southern Poverty Law Center, it's not just Tea Party and Republican-fringe types that are jumping on the Trump train.

"White nationalists from all sides of the movement are throwing their support behind Trump since his immigration plan was announced," the center reported this week.

The report cited well-known supremacists such as David Duke either outrightly endorsing or at least expressing public support for Trump, who said he doesn't need anyone's endorsement, supremacist or not.

Duke, who has a radio program and was dubbed by SPLC as "probably the most well-known white nationalist in America," actually dismissed media reports saying the endorsed Trump, but he didn't for one second hide his giddiness for Trump's xenophobic stance.

"So whatever his motivation, I don't give a damn," said Duke, according to the SPLC rep

David Duke/Facebook
ort. "I really like the fact
that he's speaking out on this greatest immediate threat to the
American people."

The report went out to name others of the Duke ilk, such as Brad Griffin and Jared Taylor.  It also mentioned that it wasn't by coincidence that Trump took to the Deep South last week, where he drew an estimated 30,000 people to a rally in Alabama.

At least one participant was heard screaming "White power!" and the editor of a supremacist publication, The First Freedom, walked around passing out copies.

And it's not limited to just spoken or printed words. Two white men beat a homeless Latino man in Boston with a metal pipe and then, as if that wasn't horrible enough, pissed on him. It seems their muse was none other than Trump – one of the attackers told police after being arrested that "Donald Trump was right, all these illegals need to be deported."

Curiously enough, while most of the other dozen-plus Republican presidential candidates are opting to stay away or decry Trump, only one continues to publicly embrace him – our own Texas senator, Ted Cruz.

Cruz has said that Trump's stance on issues such as immigration is right on.

And apparently, Cruz also likes what Trump has got to say on Iran, since he's actually invited Mr. Celebrity Apprentice to an upcoming anti-Iran rally in DC.

We're not sure if it was because of his support for Trump or something else, but Cruz was just called out for being a "jackass" by none other than the top Republican in the House of Representatives, John Boehner.

We can only wonder what Boehner would call Trump. Care to venture any guesses?