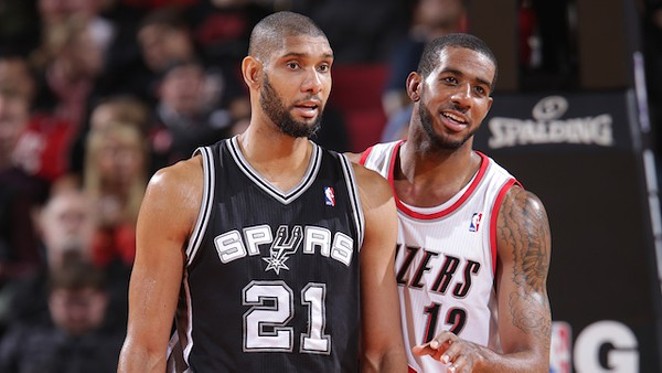 Via rantsports.com
Tim Duncan received yet another award last year, this time from the government of his home country.
When you’ve been named to the NBA All-Star Game 15 times, won five NBA championships, two most valuable player awards, three NBA Finals most valuable players awards, 15 All-NBA awards, 15 All-Defensive Team awards, Rookie of the Year and Teammate of the Year, is there any room in your trophy case for yet another accolade?

This is Tim Duncan’s conundrum. Last week he was honored by the legislature of the U.S. Virgin Islands for his accomplishments in the NBA and for his philanthropic work.

“He is not someone who likes to publically [sic] boast about his accomplishments or philanthropy. His focus is always on getting the work done and making a genuine and lasting impact,” said USVI Senate President Neville James in a news release.

Duncan grew up on Saint Croix, one of the country's main islands. He was originally a swimmer like his sister Tricia, who swam in the 1988 Olympics. But he abandoned the sport due to his fear of sharks, and took up basketball in the ninth grade at St. Dunstan’s Episcopal High School.

Duncan has financed non-profit efforts on the islands, including funding the renovation of the St. Croix Central High School gymnasium.

Duncan will receive a plaque to honor his achievements. He was also honored by the legislature in 1997 for his accomplishments at Wake Forest University, where he played for four years.