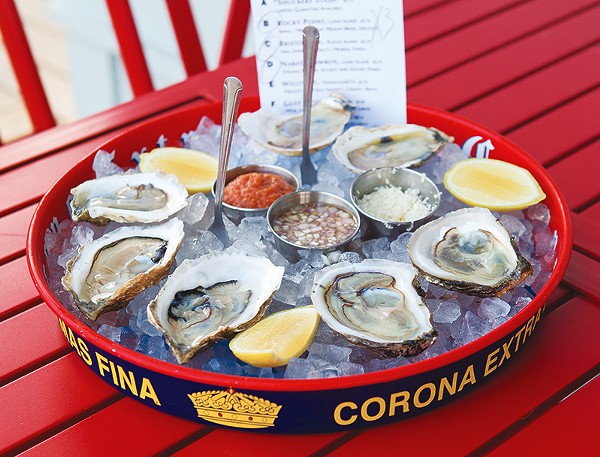 It dawned on me that in the two-ish years I've worked at the San Antonio Current, I'd yet to review a new restaurant by Jason Dady. Umai Mi, Tre Enoteca and even B&D Ice House —his joint concept with the Newman clan — were handled by freelancers. It was high time I stepped up to the plate, figuratively and literally.

Dady and wife Crystal opened Shuck Shack over Fourth of July weekend, and though the weather might have been too hot for it then, the cooler fall months will make a regular out of anyone that sits on that patio. Bright red foldable tables and chairs fill the deck, while tough, wooden picnic ones are lined up throughout the gravelly patio — the whole vibe, complete with wait staff in brightly colored fishin' shirts and cargo shorts, is casual, cool and relaxing.

A playground for the kiddos stands as a centerpiece, though my attention after each visit went immediately to the parking lot. After opening this many eateries, and learning from others who might not have had the foresight to include a parking lot, Dady and co. outfitted this space with just enough spots to keep folks happy. Thanks for not making me walk around aimlessly, Jason.

What the Shuck Shack does that the other Dady joints don't necessarily do is feature the bar equally with the food. Call me a lush, but lately, I'd rather take in a drink or two and pair it with a couple of really great snacks. The piña colada (can we get more of these on menus ASAP?) made use of opal ice, and was sweet and balanced. Paired with the kewpie deviled eggs (a tasty Umai Mi leftover), or the crunchy, white cheddar jalapeño cornmeal hush-pups, the cocktails are quite sessionable. Make things slightly more interactive with a "Cajun boil" whole artichoke and a "limonade" drink made with Deep Eddy lemon vodka, Topo Chico and a lime paleta from El Paraiso. If this drink doesn't say Texas, I'm not sure what does.

Of course, the evening could also be whiled away over one or two dozen raw oysters. The market selections change often, so the would-be oyster connoisseur can explore bivalves from across the U.S. On a recent Monday night, the full dozen Gulf oysters split among three was briny, refreshing and a light start to our evening.

But it's time to talk about the elephant (or would it be whale?) in the room — a $40 lobster roll with meat from the entire tail, two claws and two knuckles. Having visited the Shuck Shack four times since its July opening, I tried the roll twice. Once with a group of foodies who split the roll almost five ways and the second time during that same Monday when we split a more-reasonably priced $22 half roll. There is definitely a market of eaters willing to pay top dollar for freshly flown sea spiders dressed in fresh mayo and crisp celery. The full roll has its merits, but this eater can't reasonably pay the price of four craft cocktails for what boils down to a sandwich.

And while that is very much an option, the rest of the menu should enrapture eaters on a budget. The burger 'n fixins made with 44 Farms out of Cameron, Texas was delightfully layered with flavors. The fish and chips can't be missed — the batter is crisp and dreamy and consistently so. The shrimp roll employs an alluring mixture of brown butter, sofrito and horseradish aioli to delectable results — and it's only $16.

Though the menu is tidy — I'm still working my way through it — there's plenty more to focus on than one expensive item. The clam chowder à la minute should be on your list, as should the oystah' chowdah' — an East Coast classic that'll warm seafaring bones come winter.

With lunch service but a few weeks old, the Shuck Shack is already seeing a healthy mid-day crowd. Get in there — flip flops are optional.

Best Bets: fish and chips, shrimp roll, burger, both chowdahs, oysters on the half shell.