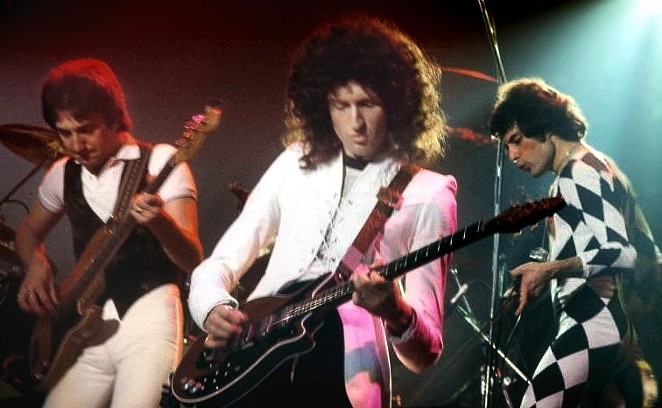 Courtesy
Queen's Brian May in mid-WWHhhaaaahhhhAAAAAHHHH!!!!
This weekend The San Antonio Symphony will be performing back to back concerts at The Majestic Theatre featuring hits from the majestic catalogs of Queen and Led Zeppelin. Creator and arranger Brent Havens will conduct the ensemble, backed by a full electric band as well as two crack singers.

Queen, a band whose depth and range is surpassed by few, if any, harnessed all the camp and drama of an off-Broadway closing night cast party with the sincerity and skill of an on-Broadway box office smash, touching on themes of suicide, rotund derriéres, and sassy teases strapped with dynamite and laser beams.

Courtesy
Led Zeppelin's Houses of the Holy album cover, featuring Robert Plant's children
Led Zeppelin - famously dubbed by The Who's Keith Moon and John Entwistle, who expected the combustible band members to live up to their namesake - are no strangers to musical appropriation, as they are, The Cramps aside, the best cover band of the last forty-five years (if one does enough digging into blues standards and plagiarism accusations). This, however, in no way diminishes their capabilities as generators of a strut-factor 10, (you can even strut to 'em while seated)! "Kashmir" is an obvious choice for The Symphony, but the discerning ear would benefit from "Since I've Been Loving You," "When the Levee Breaks," "Traveling Riverside Blues," or "Black Mountain Side." I'll be stoned.