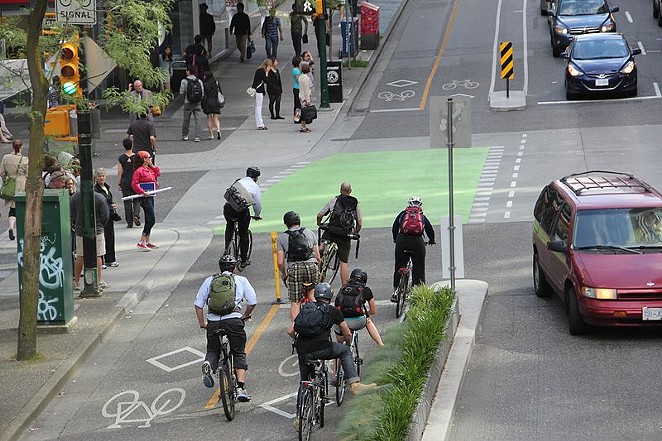 Wikimedia
This is what bike lanes look like in Vancouver.
You've probably heard this before: San Antonio is planning for more than a million new residents in 2040.

There's a lot of plans, too. One of them is the Multimodal Transportation Plan, which the city is seeking input on from bicyclists through its SA Tomorrow initiative, in the form of a survey.

SA Tomorrow is a three-pronged planning effort to prepare for the predicted influx of new residents.

Jill Harris, senior transportation planner for the city, says in a press release, that according to the Alamo Area Metropolitan Planning Organization, 325,000 residents use a bicycle once a month, mainly for recreational purposes, while an estimated 11 percent ride bikes to work or school.

“With one in five people riding bicycles in this city, and that number is expected to increase, it’s important to learn about their habits, ideas, and concerns," Harris says. "The more input we get from the community, the better we can plan for them today and in the future. We hope people will give us a few minutes of their time to answer our survey questions about bicycling in San Antonio.”

The survey wants to know about riding habits, "including frequency, purpose, preferred types of bicycle infrastructure, safety, ways to encourage more riding, and car drivers' and bicycle riders' behaviors toward each other." The city also wants to know about issues preventing people from riding, which according to the city, include stray dogs, crime concerns, safety issues, lack of bicycle infrastructure, bad lighting, parking problems, health, weather and seasonal changes.

Survey results will be used to incorporate bicycles into the Multimodal Transportation Plan, and the City's Transportation & Capital Improvements department will use the data to prepare an update to the Bicycle Master Plan.

When the Multimodal Transportation Plan is complete, it will be used to consider projects that will be included in the city's 2017 bond program, which is the primary funding source for capital improvements at transportation facilities.

The survey is available in English and Spanish and closes on Nov. 20. Survey results will be posted in December at www.satransportationplan.com.