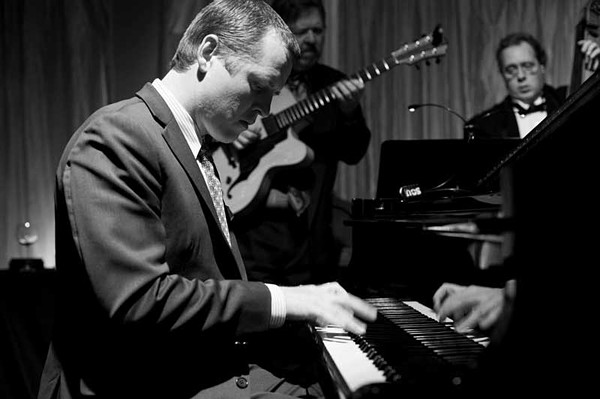 Courtesy
"Doc" Watkins in action
I know nothing is as cool as the Brian Setzer Orchestra playing "Yabba-Dabba Yuletide" or the Cherry Poppin' Daddies doing anything, but local piano whisperer Brent "Doc" Watkins and his Big Band will be surfing the cranberry-crimson wave of holiday classics on the crest of the yuletide (could you follow that?) on Thursday, December 10. The festivities will begin at 8pm in Watkins' contribution to The Pearl, and the newest jazz and americana bar in town, Jazz, TX.

The band will be a sixteen-piece, which, in musical terms is referred to as a sex-plus-ten-other-people-tet, and will perform such classics as "Winter Wonderland," "Jingle Bells," and "A Charlie Brown Christmas."

Jazz, TX is still not scheduled to open until Spring 2016, so this is a great opportunity to scope out the new digs of one of San Antonio's premier keyboardists and the most recent addition to our growing smorgasbord of live music venues. Tickets are priced at the curiously random value of $27.37-$64.29, but get them soon because they'll be gone before you can say "Good King Wenceslas" 2,942 times.

Brent "Doc" Watkins can be heard every Sunday at Esquire Tavern on the Riverwalk at 3pm.