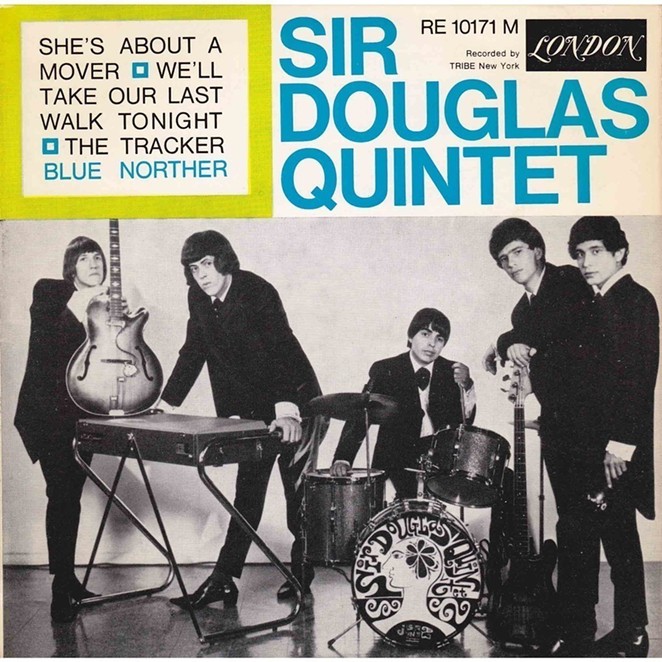 Courtesy
From left to right: Doug, Augie, Johnny Perez, Jack Barber and Frank Morin
The Quintet, headed by San Anto native Doug Sahm and known for the instantly distinguishable organ sound of Augie Meyers' Vox Continental, have had their first hit single, "She's About a Mover," named to the list of 2016 GRAMMY Hall of Fame recordings. The Tex-Mex meets Mersey beat feel of the tune, complete with Ray Charles shout out, has been selected along with tracks by Bob Dylan, The Zombies, Fleetwood Mac, The Andrews Sisters, John Coltrane, John Lee Hooker, Leadbelly and more, to be inducted into the GRAMMY Hall of Fame.

I reached out to Augie Meyers to see what his feelings were on the Quintet's landmark inclusion, to which he had not even been informed! In typical Augie fashion, he was humble and humorous. "I wish Doug was here for this. He would say, 'Groovy. Far out.'"

As stated on GRAMMY.com, the Hall of Fame works to acknowledge "both singles and album recordings of all genres at least 25 years old that exhibit qualitative or historical significance." Now in its 43rd year, the Hall of Fame list consists of 1,013 of the most iconic American songs of all time, fine company for the classic tune from two of San Antonio's legendary sons!