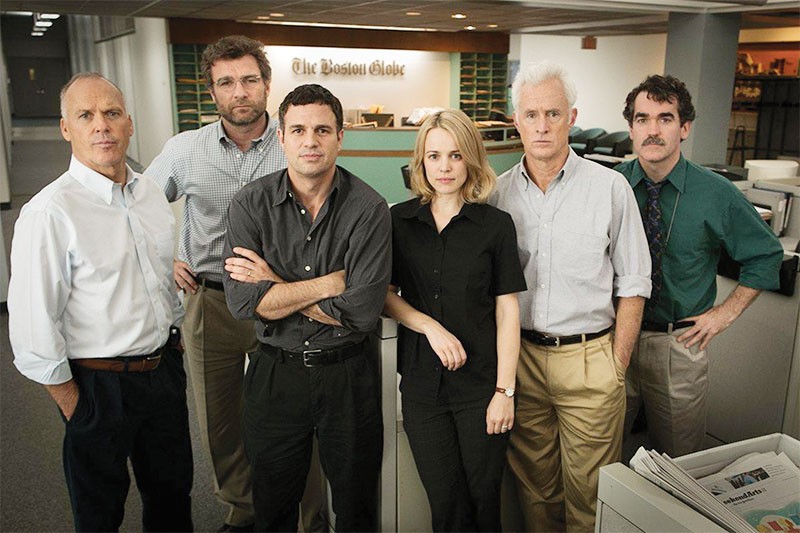 Courtesy
Spotlight takes a spot in the pantheon of journalism flicks.

After scraping through 189 films over the last 12 months, here is a look at my picks for the best films of 2015.

10. Grandma (Dir. Paul Weitz) • Sweet, funny and delightfully acerbic, watching actress Lily Tomlin do her best work since earning an Oscar nom for 1976’s Nashville is monumental in itself. As a grandmother driving her pregnant teenage granddaughter around town to find the money she needs to get an abortion, this pro-choice dramedy is a charmer.

9. The Revenant (Dir. Alejandro González Iñárritu) • Oscar-winning director Iñárritu (Birdman) takes a harrowing tale of survival and revenge and gives five-time Oscar nominee Leonardo DiCaprio (The Wolf of Wall Street) the most physically demanding role of his career, which he effortlessly disappears into. It’s the most beautifully shot film this year, with two-time Oscar-winning cinematographer Emmanuel Lubezki (Gravity) behind the camera turning bear attacks into poetry in motion.

8. The Second Mother (Dir. Anna Muylaert) • Household dynamics are agitated in this Brazilian film when the estranged daughter of a live-in housekeeper moves in with her mother and the family she works for. Themes of classism and motherhood run deep as lines are crossed and characters maneuver their way through uncomfortable domestic situations.

7. Amy (Dir. Asif Kapadia) • Devastatingly sad, this extremely well constructed documentary on talented British musician Amy Winehouse, who died in 2011 at the age of 27, takes a heartbreaking and eye-opening look into celebrity culture and reveals the iconic singer’s downfall with admiration and insight. Director Kapadia (Senna) uses powerful archive footage and interviews to paint a striking portrait of a tragic spirit.

6. Ex Machina (Dir. Alex Garland) • Spellbinding, unique and oftentimes humorous, this directorial debut by Garland (writer of Sunshine) is in the same quiet realm of the sci-fi genre as recent movies Moon and Source Code. When a tech programmer (Domhnall Gleeson) wins a contest to meet his company’s reclusive CEO (Oscar Isaac) at his remote office location, he is introduced to a unique brand of artificial intelligence. It’s creepy, compelling and asks some interesting questions about the power of human sexuality.