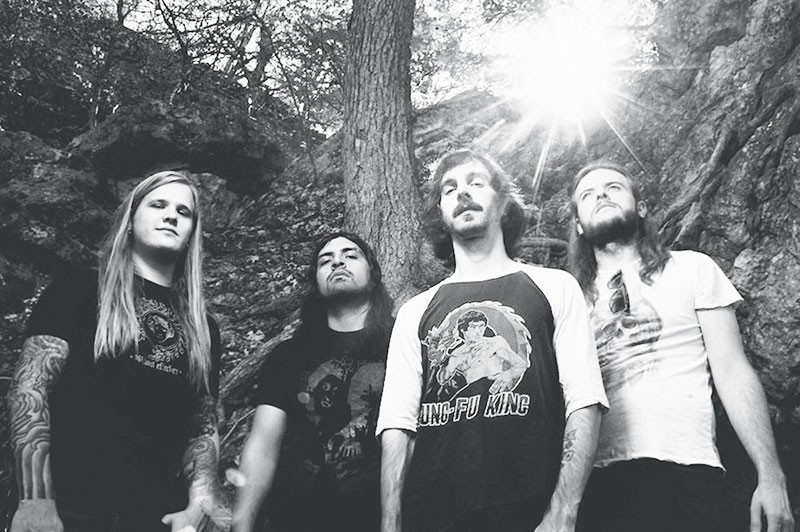 Sandy Carson
The Sword: T-shirts? How level one of you.

Austin's The Sword have been blowing out eardrums and giving stoned teenagers dope-visions of dragon-slaying conquests, Amazonian warrior women with a bloodlust only the edge of their blades can satisfy, and THC-fueled space travel to far off nebulae since the mid-2000s.

The band's full-length debut, Age of Winters, took off like a flaming arrow and pierced its way into the armored chest plates of metal fans the world over. Since these humble beginnings, the band's popularity has exploded, sparking tours with Metallica, Lamb of God, Machine Head and Clutch, appearing on your Xbox and PlayStation — thanks to Guitar Hero — and contributing to the soundtracks of comic book movies that someone, somewhere has to give a shit about, right? You can tear up the trailer park with your LARPing buddies on your The Sword BMX bike, or even slather The Sword hot sauce on your favorite slain beast's tender hindquarters, cooked on a spit in the darkest enchanted forest night. You, your Dungeon Master and your fellow adventurers can wash the fiery concoction-infused flesh down with The Sword's very own Iron Swan Beer, brewed by fellow Austinites Real Ale Brewing Co.

The band's newest record, High Country's Collector's Edition Bundle even comes with a stash box, dugout, one-hitter, rolling papers and grinder; just to make sure every time you light up, some stoner-rock riff from beyond our realm of understanding gets beamed into the pleasure-centers of your brain. Ironically enough, High Country seems like the band is attempting to reel back, or shed off, some of the well-tread tropes of the stoner rock genre and introduce more classic rock and bluesy elements, including multi-part harmonies and a guitar tone that has way more breathing room. This time around there's probably just as much Blue Öyster Cult as there is Black Sabbath. While the songs will never surprise you (High Country makes you think you're some sort of oracle; some of the riffs are so predictable you see them coming a mile away), it's a solid genre record and is in no way horrible, but it does come across as a bit middle-of-the-road.

The Sword's performance at the Paper Tiger on Friday should hold you over until Uncle Acid make their way 'round these parts of the shire.

The Sword with Royal Thunder