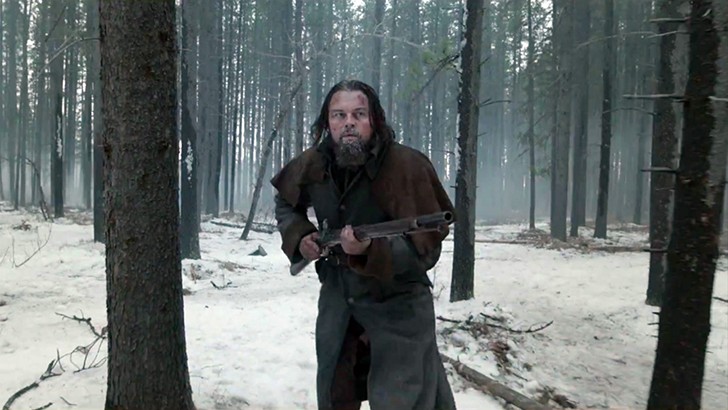 I see poo in your future, Leo.

The Revenant • Spoiler alert: Leo's gonna have to eat poop. If this doesn't get him that coveted Oscar he's been denied for so long, well, I guess the supermodel girlfriends, millions of dollars and colossal command of his craft will have to suffice.

Leo plays coontail-capped frontiersman Hugh Glass in the follow-up to Alejandro Iñárritu's Birdman. The father of a half-white half-American Indian boy, Glass is mauled by a bear while on an expedition, his son is killed and he is left for dead by his fellow white settlers and the particularly repugnant Tom Hardy. Cue the poo.

As DiCaprio consistently turns in prodigious roles, his status as one of the finest thespians of our time is secured. However, if he wins this year for The Revenant, and he eats poo in the movie, it'll be great to think that all he had to do 20 years ago was "method act" some feces into his mouth as Arnie in What's Eating Gilbert Grape?

Elvis: That's the Way It Is • In honor of Elvis Presley's 81st birthday — that paramount of anniversaries — the documentary chronicling The Cracker King's return to the stage is being re-released. Filmed seven years before his 1977 demise, Presley is loose, undoubtedly stoned, conversational and cocksure. A look into the embodiment of American excess and the talent crushed under its weight, before he faked his own death.

13 Hours • Adorable romantic prankster Jim Halpert from NBC's The Office was really a CIA operative the whole time, and he was at Benghazi! Rife with Affliction tees, guys named Jack, Boon, Bub, Tanto and Oz, gruff voices only surpassed by gruffer beards, and the deplorably over-used line "Welcome to Club Med," in reference to a place that is not Club Med. USA! MICHAEL BAY! USA! MICHAEL BAY! ensues. But for 121 minutes.