10 Questions With the Creator of Spurs Special Forces 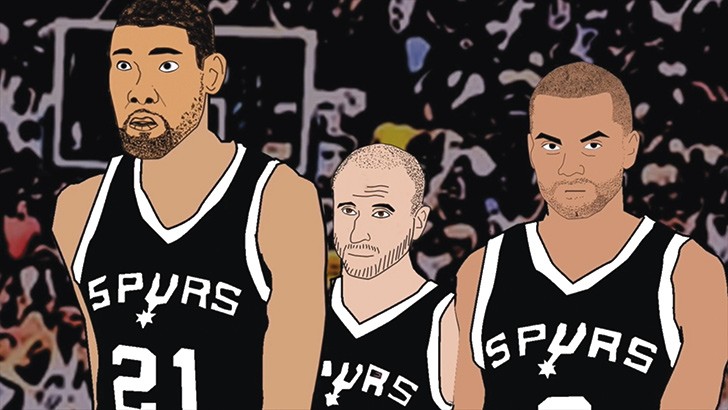 Those five titles? They’re just a front. Taking down evil-doers like Phil Jackson and saving San Antonio is the Spurs’ real job.

Who would've guessed that a web cartoon about some of the most beloved figures in San Antonio was the concoction of a Los Angeles-based economics professor?

But Spurs Special Forces, the fictional animated YouTube series that casts the Spurs as "a crack international commando unit," is just that. It's created by Matt Hill, an economics professor at the University of California, Los Angeles and NBA nut who moonlights as a comedy writer.

The backstory is that the Spurs, (actually an acronym for Secret People Undercover as Rad Sportsplayers, who knew?) were forced into "hiding in plain sight" after being framed for a crime. Now they're secret mercenaries for justice, who win NBA titles on the side to keep up the façade.

Hill's made three episodes since January 2015, which have collectively earned over 600,000 views. In the first installment ("DNP-Kidnapped"), the team must rescue Manu Ginobili from an obsessed fan who sends them a bald spot as proof of his captivity.

The most recent episode — in which Tim Duncan, Tony Parker and Ginobili must save Coach Pop from New York Knicks President Phil Jackson and salvage the team's pitch to then-free agent LaMarcus Aldridge — was posted to YouTube in mid-December 2015.

The San Antonio Current asked how a fair-weather Lakers fan found himself animating the Spurs, what he knows about San Antonio and how he makes the cartoons. This interview has been edited for clarity and length.

How did you come up with the idea?

People think that ideas just come, but it's just work. You sit down and you just think. I was at a coffee shop trying to come up with ideas and [Spurs Special Forces] was one of them. I'm a huge NBA fan, I'm an observer of the NBA. I love the Spurs. I love Pop so much. [I thought] it would be fun to see them in a different context.

What process do you use to make them?

I use Photoshop to make the characters and then After Effects to animate it. I had no background in animation before I did the first one. But I liked the idea so much that I taught myself how to animate. That's why the animation is so bad — I never went to school for it, it's not my strong suit. I learned just enough to be able to do it.

Have you become more of a Spurs fan since making the videos?

Oh yeah, absolutely. When I did the first [video] I expected maybe 1,000 people to see it. When a lot of people saw it and liked it, I felt like I was grateful to the Spurs. I was dying that last playoff series when they lost to the Clippers, because I hate the Clippers so much. When [the Spurs] went down in Game 7, it was a great game, so much fun to watch, but it killed me. They're the best. You've got to respect the organization even if you're not a fan.

Did you end up researching San Antonio for the videos?

I did. I'm familiar with everything basketball-related from following the league, but I've never been there so there's things I don't know. I had to Google what's big in San Antonio, what's going on there.

What did you find out?

It was the River Walk, the Alamo and SeaWorld. I haven't used any of those [for the videos], but the fourth one I've written and animated a little bit, it does feature the River Walk and one of those other things. I'd love to go to San Antonio, go to a Spurs game.

How long do they take to make?

It's really hard to measure because it's not like I sit down and make it all at once. I have a full-time job and sometimes I'll have another job on top of that job. I make other web series on the weekends. Really, I put it together whenever I have free time. An hour here, a few hours there. The animation is a tedious process.

When can we expect the next one?

It takes me so much longer to make them than I think. I think I'll be able to finish this one in a month or something, and then it takes me forever because I have to make money, I have a job. I don't want people to get too excited that the fourth one will come out anytime soon. But it's going to be really long, much longer and it will feature a Spur from the past.

Do you know if anyone with the Spurs has seen this?

I have no idea if they've seen it. I haven't heard from anyone associated with the Spurs. I hope they see it at some point. Maybe they have seen it and just hate it.

You're a fan of the NBA — what do you think of the Spurs this year?

The thing with them is they're kind of flying under the radar. They look incredible. Their point differential is close to the [Golden State] Warriors. I don't think they're as good as the Warriors, but they're right there. I think they have a psychological edge on the Warriors. I hope we get to see them play. I think the Spurs are clearly the second-best team in the league, and maybe they're even 1B.