Space Chase: In pursuing Space Command, San Antonio once again looks for an outside savior 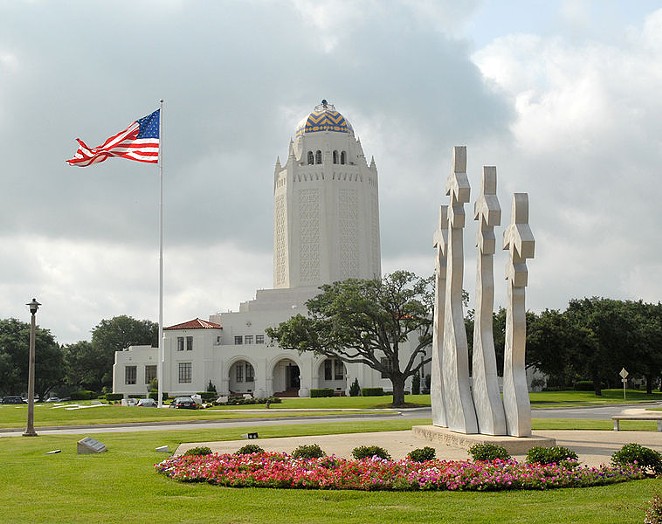 Here San Antonio goes again. Looking to someone else for our future and our salvation. Hoping Washington will deliver the goodies and jobs to keep our city growing and prospering.

In quest of “significant” economic impact, Mayor Ron Nirenberg flew off to DC to ask the Pentagon to grant us the new headquarters of the Space Command. U.S. Sen. John Cornyn joined in the plea, arguing that San Antonio is “Military City, USA,” “as patriotic a city as they come,” and “a natural fit.” Local business leaders joined the fray, arguing to the Air Force that we are the natural home to another contingent from the military branch.

It’s what San Antonio has done for generations — look to Washington and the federal government to grant us jobs and dollars, in the hope that someone else would pay to grow and develop our city.

In the wake of the devastating flood of 1913, city leaders dithered, despite the long-apparent need to invest flood control. Rather than take on the cost of those improvements, the leaders of the Chamber of Commerce turned to the federal government and the Army Corps of Engineers.

At the request of U.S. Sen. Morris Shepard, Major E. N. Johnston of the Corps finally arrived in the city in November 1916 to assess the flooding situation and the prospect of federal help. But the Army’s ultimate decision, delivered in December 1919, was that the San Antonio River wasn’t a navigable waterway and thus didn’t qualify for federal aid. Waiting on the promise of federal dollars, the city avoided dealing with its flooding problem, setting up the catastrophe of the 1921 flood.

A decade later, when the Army Air Corps faced the problem of increasingly congested airspace around the pilot training centers at the Kelly and Brooks bases, military leaders pressed for an expansive new combined training field requiring some 2,000 acres of land. But the Army was unwilling to pay for a site, particularly as a host of cities around the country began to offer their own sites free of charge. The first plan floated by the Chamber of Commerce involved the city taxing the properties and firms to be benefitted by the new flying school.

The city attorney concluded that any form of city financing was unconstitutional, forcing the Chamber to seek hundreds of thousands of dollars through private donations. And while some were willing to donate to the Army, the donations fell well short of what was needed to purchase the site. Finally, at the last minute, a local judge ruled that the city could sell notes backed by delinquent property taxes. Local banks loaned the money to the Chamber-created Airport Co. with the promise that the city would repay the loan, and at the very end of December 1927, the city was able to commit funds and the site to the Army.

The efforts to have Washington boost San Antonio’s fortunes didn’t end with the development of the “West Point of the Air” at the base then called Randolph Field. Even after the massive expansion of military missions in the city during World War II, local business leaders continued to look to DC, promoting the city as the home for the planned Air Force Academy in the early 1950s. They appeared convinced that San Antonio had a special relationship with the Air Force. The Chamber promoted locations at Kelly and Lackland, and finally suggested a Camp Bullis site for the new Academy. However, the city ultimately lost out to Colorado Springs.

And we’ve since lost other Air Force missions and bases, since Kelly and Brooks have been forever changed by base realignment.

In repeatedly looking to the military and the federal government to bestow jobs and economic wealth, successive generations of local leaders have too often chosen to ignore the realities of the city’s true situation and its needs. Public improvements, such as flood control and new roads, were often deferred or ignored in favor of accommodating the Army or the Air Force.

By regularly looking outward — to Washington, or to Silicon Valley, or to Japan — for jobs and new employers, San Antonio’s business leaders have focused on marketing, rather than developing, the city. Yet the recent renewal of city funding for Pre-K SA and approval of Proposition B, the SA Ready to Work initiative, suggest local voters see the imperative to invest in San Antonians.

Our leaders need to focus their efforts — and more public dollars — on the people and the obvious needs of this community.