Courtesy Image / Douglas Architects
Rendering of the new Rosario’s at 722 S. St. Mary’s St.
Restaurateur Lisa Wong received conceptual approval from a city commission on Wednesday to demolish most of the old El Mirador building  on South St. Mary’s Street so she can build a new home for Southtown staple Rosario’s, which she has owned for 28 years.

Overseen by Wong and Douglas Architects, the reconstruction will replace the current one-story stucco structure—a local landmark—with a new 14,000-square-foot, two-story building, which will include a dining room, lounge, rooftop bar, an exterior elevator tower, and outdoor dining and seating areas. Most of the exterior will be clad in brick veneer, decorative metal screens and decorative glass, and a small portion in D’Hanis brick.

The plan includes relocating the F.L. Dixon House, itself a local landmark and current home to Pig Liquors, to the eastern most part of the property, closer to the existing King William Garden House. 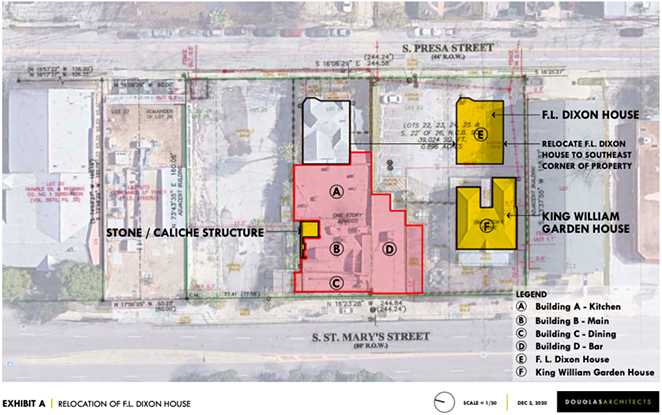 Wong must submit a landmark designation request for an 1860s stone and caliche structure, part of which faces the parking lot, part of which El Mirador used as a dining room. The structure was originally the Jim Mitchel homestead and was expanded on over the years, “including in the 1940s, when a stucco façade and tower were added for Ward’s New Confectionary and Drive Inn,” the city’s Office of Historic Preservation (OHP) wrote in the HDRC agenda packet.

“At the time of renovation, a portion of the original interior of the caliche stone structure had been preserved,” OHP wrote. “The building was further modified after the 1960s to include the front enclosed porch element and the removal of the 1940s tower element.”

The El Mirador building on the property was designated a historic landmark in the 1980s because of the stone and caliche structure.

However, the HDRC only has purview over building exteriors, and Wong plans to enclose the structure by extending the new restaurant footprint over the existing parking lot to neighboring Maverick Texas Brasserie. By designating only the caliche structure, the HDRC will have the ability to oversee it even when enclosed. Additionally, one of the stipulations requires the caliche structure to be used in a publicly accessible space inside the new restaurant in the final version of the project proposal.

Wong and Douglas Architects plan to deconstruct portions of the structure, and reincorporate them into the new building.

During the meeting, Commissioner Jeffrey Fetzer said Wong should keep it as a dining space.

The stone and caliche room inside the former El Mirador restaurant.

The new design will double the size of the current restaurant, providing a more diverse dining experience to patrons, according to Wong. The conceptual plan includes a “COVID Consideration” section that will create safer gathering spaces for patrons.

Before seeking approval from the HDRC, Wong and Andrew Douglas, architect and founder of Douglas Architects, worked closely with the Conservation Society of San Antonio, the Lavaca Neighborhood Association and the King William Neighborhood Association during the plan’s development. All three groups expressed support for the redevelopment, while also calling for adjustments.

Margaret Leeds, representing the King William Neighborhood Association, shared a letter from the association’s architectural advisory committee, stating that its support was contingent on receiving an enforceable noise mitigation agreement to offset possible amplified noise levels within the neighborhood. Wong addressed these concerns during the presentation.

“You have our commitment to continue to work on some of these design elements, as well as, I know there’s some concerns on noise,” Wong said during the presentation. “As I’ve stated before, I’m a restauranteur. I’m running a restaurant, not an entertainment venue, so I know we can provide the correct language to give everyone the confidence that they can continue to enjoy the neighborhood.”

The Conservation Society expressed both its support of build and concerns regarding the size of the proposed project, specifically the elevator tower.

“The Conservation Society remains concerned that the massing of the new building includes a second story canopy and fence that are out of scale with the neighborhood,” Patti Zaointz, the society’s president, wrote in a statement read during the meeting.

She continued, “The Lavaca and King William neighborhoods, including commercial frontages, are defined by modest structures and a pedestrian-oriented rhythm of open spaces and building fronts. The long, continuous facade proposed here challenges the setback and massing pattern—this could still be addressed by bearing the setback.”

During the meeting, Douglas agreed to reduce the visual impact of the proposed tower elevator.

In a letter written on behalf of the Lavaca Neighborhood Association, the organization echoed the Conservation Society’s concerns and recommended the exclusion of fencing in the pedestrian right-of-way along the sidewalk.