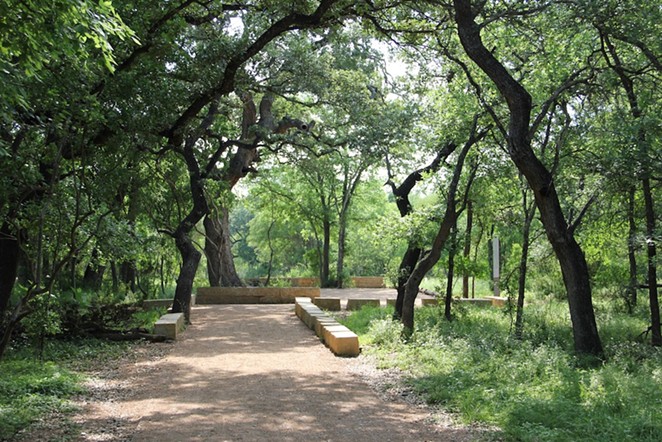 Author and naturalist John Muir once said: "In every walk with nature, one receives far more than he seeks." In San Antonio, we are fortunate to live in a fairly large metropolitan area that still has a number of lush green spaces that are perfect for getting that same feeling Muir mentions. In the last 10 to 15 years, city government has made it a priority to provide residents with enough places to get back in touch with nature, as well as places to stretch our legs and get a bit of exercise. Here are some of the best hiking spots in the city, regardless of skill level.

Dwight D. Eisenhower Park • Formerly part of Camp Bullis, Eisenhower Park (19399 NW Military Hwy.) opened to the public in 1988, and has since become popular among locals. The park has more than five miles of hiking and walking trails of varying degrees. The highlight is an observation stand near the summit of one of the park's tallest hills, which looks out onto Loop 1604. Visitors to the park can expect to see a mix of wildlife on the trails, ranging from native whitetail deer to raccoons and armadillos. It is also a popular spot for bird watching.

Friedrich Wilderness Park • Situated on the bank of the Balcones Escarpment, Friedrich Wilderness Park (21395 Milsa Drive) is a 240-acre natural park created in 1978 on more than 180 acres donated to the city. Thanks to its location, the park is known for its hilly terrain and dense outcroppings of juniper trees. Bird watchers also head to the park since it's the nesting site for two federally listed endangered species: the black-capped vireo and the golden-cheeked warbler. Because of this, the park is open to pedestrians only, no skating or cycling. This is great news for hikers, as the paths stay clear all day long.

Government Canyon State Natural Area • Government Canyon (12861 Galm Road) is one of the city's crown jewels in terms of green spaces. It first opened in 2005, and the 12,000-acre park is a perfect example of what the rugged Texas Hill Country looks like in its natural, untouched state. There are more than 40 miles of hiking and biking trails ranging from remote, rugged canyons to gently rolling grasslands; there's something for every skill level. Hikers can spend all day (and all night for that matter, as camping is an option) on the land, which is also home to the only known dinosaur footprints on public land in Bexar County.

O.P. Schnabel Park • Huddled away on the city's bustling northwest side is O.P. Schnabel Park, which consists of 202 acres of oak- and mountain-laurel-laden natural beauty. It is one of the area's oldest parks, opened in 1964, and offers visitors 4.5 miles worth of trails perfect for hiking, biking and cycling. The paths are carefully marked to show what skill level is required to traverse them. It has often been called "the cleanest little park in Texas," thanks to the constant efforts of its founders to preserve and beautify the grounds. Hikers will enjoy how remote it feels, even though it's in the heart of one of the city's busiest areas.

Phil Hardberger Park • Phil Hardberger Park (8400 NW Military Hwy.) is arguably the city's premier green space. Built on the grounds of a former dairy farm, the 311-acre park has been naturally and respectfully preserved. Since its opening in 2010, Hardberger Park has been a top destination for outdoor enthusiasts looking to take advantage of the park's more than 5 miles of hiking and biking trails. This is also one of the area's most dog-friendly facilities, with two dog parks on the grounds. For hikers, the Geology Trail and the Water Loop are two favorite spots, both in terms of difficulty and scenery.