Hot Kidz in the City: A Chat with a Kidz Bop Kid 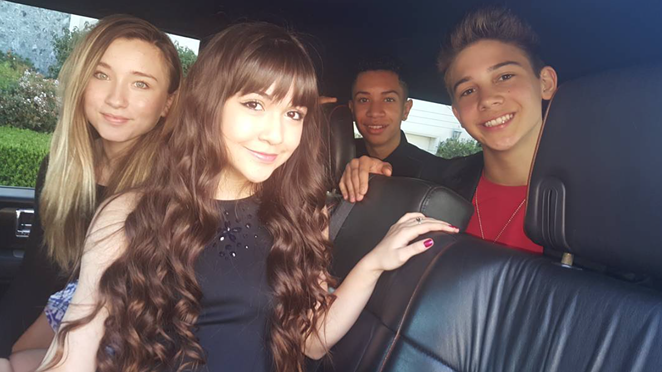 Courtesy
Kidz Bop kids Ashlynn, Sela, Grant and Matt, on their way to the Nickelodeon's Kids Choice Awards.
At 15-years-old and with over 16 million albums sold, it's about time for Kidz Bop to be taken seriously, sorta.

We're all well aware of the kiddy capitalist entity known as Kidz Bop: a money makin' machine that strips dirty words and suggestive themes from Top 40 pop songs and has the refurbished tune sung by cherubic tweens and distributed worldwide. But why has Kidz Bop been faced with so much controversy and ridicule for the past decade?

Word on the street is the haterz say there's no point to cleansing the original song of potty language and crudeness, but fanz of the series think it's an inoffensive, fun time. Regardless, both sides agree that the formula is foolproof. As long as there's pop music and children, Kidz Bop instantly has a market.

Kidz Bop, in a way, is refreshing in that the choir of eager popstar hopefuls are excited at the chance of reaching towards the stars. Without KB, the kidz wouldn't have the chance to have their voices heard on the album and their faces seen in music videos and live concert productions. Kidz Bop alumni include the now mega-famous Zendaya, Teen Beach hunk Ross Lynch and Latina sweetheart Becky G. Like the Mouseketeers in the The Mickey Mouse Club before them, Kidz Bop is a platform for aspiring musicians whose talent is bursting from the seams of their Justice and Gap Kids brand threads.

Not just satisfied with Top 40 hits, the brand's branched out into holiday and decade-themed compilations, including the 100% Kosher Kidz Bop Hanukkah and the Bret Michaels endorsed Kidz Bop Monster Ballads. The Rock of Love heartthrob even played guitar, accompanying his daughters Raine and Jorja, on the Kidz Bop-ified "Every Rose has its Thorn" - a song that's as squeaky clean as Warrant's "Cherry Pie."

Courtesy
Sela Hack
We spoke to San Antonio native and current Kidz Bopper Sela Hack, 15, over the phone to talk about living in LA, missing her family and how Kidz Bop changed her life.

"I was an understudy last year and I opened up a few of the shows for them," Sela said, when asked about how she got in with Kidz Bop. "There was an opening spot for auditions and now I'm a Kidz Bop Kid!" she exclaimed with an abundance of enthusiasm in her voice. Talent was in her blood from birth. "I started singing and dancing when I was little," stated Hack, "and I've always enjoyed it."

"I'm just living in LA for rehearsals right now," she remarked on how long she's lived in the American show biz capital, "I've been here for a few weeks now just to run through the show before we go on tour." She continues, "I miss my friends, cool restaurants, Fiesta Texas, going shopping at La Cantera, so yeah."

What I was interested in learning from Hack was if she is familiar with the "unclean," uncensored versions of the Kidz Bop tunes, as many of them are decidedly R-rated.

"I only listen to the original songs so I learn them, and then the Kidz Bop version to record, so I do both."

On life after Kidz Bop Hack commented that she's interested in "Maybe writing and recording my own songs and doing shows as a solo artist ... There's so much training involved, but it all comes together at the end so it's worth it."

Catch the 2016 "Life of the Party" Tour at the Tobin Center on Sunday, April 24 and pick up Kidz Bop Greatest Hits on April 1.