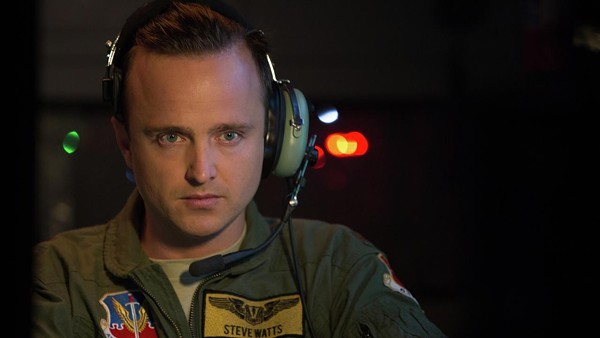 
In director Gavin Hood’s new thriller Eye in the Sky, actor Aaron Paul (TV’s Breaking Bad) plays Steve Watts, a U.S. drone pilot who must make a moral decision in regard to bombing a terrorist target in Kenya that will result in the death of an innocent, young girl. The film also stars Academy Award winner Helen Mirren (The Queen) and the late Alan Rickman (Harry Potter series).

During a phone interview with the Current earlier today, Paul, 36, talked about the type of research he did for the role and whether offering a message about modern warfare is just as important to him as an actor as entertaining moviegoers.

Eye in the Sky is currently playing exclusively at the Santikos Bijou Theater.

What kind of research did you do going into a film like this?

I met a pilot who was just full of endless amounts of information. We picked his brain before we started shooting at all hours of the day. He was a jet fighter pilot for many years and now he flies drones. He has never dropped a payload on anyone. He’s really just been the eye in the sky. That is the purpose, 95-99 percent of the time. With this film, it was supposed to be a capture-not-kill mission.

Do you have a personal opinion you can share on U.S. drone strikes and how they are being used today in the fight against terror?

Yeah, I think going into this movie I had my own opinion on it. Then after educating myself and really understanding what is actually going on, I viewed it a little differently. War is awful. I hate war, plain and simple. But I don’t know. Military drones are a touchy subject.

When looking at the big picture, how much do you think U.S. citizens know about how the U.S military combats terrorists with drones?

I think some people know. I really didn’t know much about it before, but I tried to educate myself as much as possible. I just sat down with this pilot and asked him as many questions as I could. It’s a scary thing. I asked him if he’s ever had to pull that trigger and if he’d ever been in that situation. He had been in that situation where he felt like he was going to end up having to pull the trigger, but he never did.

Do you think you could’ve pulled the trigger if you were put in that situation?

If I was asked to pull the trigger knowing that innocent lives were going to be taken – in this case [the life of] a young little girl – I don’t know if I could ever pull the trigger. That’s why I’m not in those shoes.

As an actor, what drives you the most when making a film as timely as this - the entertainment value of the project or delivering some sort of message about modern warfare?

I think a combination of both. At the core, movies are entertainment. You go to a theater and transfer yourself into another world for a couple of hours. It’s also very nice when you’re able to tell a story that makes people think and question their own internal values and morals. I think this movie absolutely does that. It is such an edge-of-your-seat thriller. From the first few minutes of the film, you are on the front lines of terrorism. It’s a scary place to be.