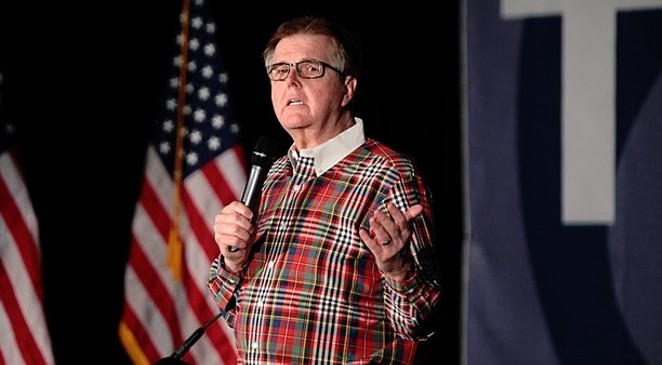 Wikimdia Commons / Gage Skidmore
Lt. Gov. Dan Patrick
We understand that in the current political environment it can be really tough to tell the difference between real news stories and satire, which is precisely why we're letting you know that the Mendoza Line is a weekly work of satire.

Texas Lt. Gov. Dan Patrick is reluctant to take either of the new COVID-19 vaccines over concerns they might reverse the on-air vasectomy he got nearly 30 years ago while hosting his Houston radio show.

Patrick had the public procedure in 1991, during his career as an AM talk jock. At the time, he said he wanted to encourage men to consider the surgery instead of expecting their wives to undergo a more complicated sterilization procedure.

While vasectomy reversal wasn’t a side effect mentioned by Bolsonaro, members of the Texas Democratic Caucus had theories why Patrick seized on the idea.

“He probably heard us talking about how great it would be if it reversed his vasectomy,” Democratic Sen. Royce West said. “Another vasectomy, broadcast live, might keep him out of the capitol long enough for us to get something meaningful done.”

“We did float the idea that an on-air reversal could increase Patrick’s midichlorian density,” Democratic State Rep. Diego Bernal said. “We figured he has to know it’s bullshit. But it turns out he’s never seen Star Wars, so that’s on him.”

“We told the little governor that he could expect a ‘vast difference’ in his well-being after being inoculated,” she said. “I guess he took that to mean regrowth of his vas deferens.”

Republican Sen. Donna Campbell, an emergency room physician, said she’s tried to reassure Patrick he'll remain sterile should he decide to get the vaccine. However, she also advised him against giving in to a health crisis fabricated by liberals to embarrass President Trump.

“I told him his biggest concern should be the trackers placed in his body by Bill Gates,” Campbell said. “He has no business getting vaccinated in the first place. It only legitimizes the so-called virus, which is fake, of course. At least that’s what [Texas GOP Chairman] Allen West told me to say.”