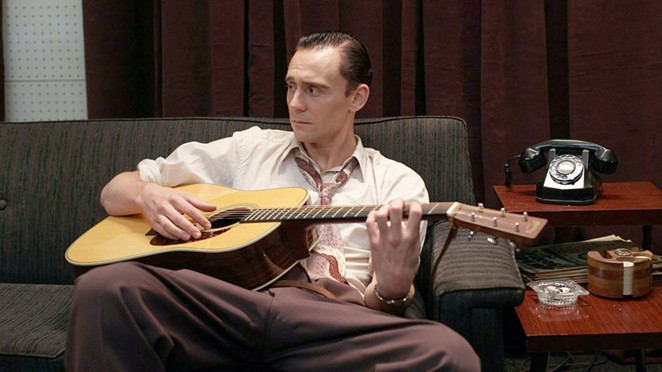 In the new music biopic I Saw the Light, British actor Tom Hiddleston (The Avengers) portrays late country and blues singer/songwriter Hank Williams, who passed away in 1953 at the age of 29. Considered by many as one of the most influential musicians of the 20th century, Williams was best known for a handful of No. 1 hits, including “Lovesick Blues,” “Hey Good Lookin’” and “Why Don’t You Love Me.”

During an interview with the Current earlier today, Hiddleston, 35, talked about the demons Williams had to battle in his life and how that affected his career, and why he decided to forego lip syncing and sing Williams’ music for the film himself.

I Saw the Light opened at theaters in San Antonio today.

There is a scene in the film where Hank tells a reporter that there is a little darkness in everyone. Without that darkness in his life, do you think Hank would’ve been able to write the songs he did?

Oh, that’s such a good question. That’s such an interesting question. It’s really a question about all lives. There something about a piece of music or a painting or a poem or a film. Does it have value if it doesn’t at least contain a slice of relatable human pain? If you think of all the great songs and all the great musical artists, they manage to channel something very true about the human condition, which is that we’re all open to the same experiences. We all experience the same joy. We all suffer the same pain. I think certainly with Hank, his personal demons and personal pain and the difficulties of his life were something he channeled into his music. The sincerity and simplicity of that is what people really connected to.

When you look at some of the talented musicians who died before their time like Hank, Jim Morrison, Janis Joplin, and others, do you think their personal pain is synonymous with who they were as artists? Do you think that is ultimately part of their legacy?

Yes, I do. I think it becomes part of the legend. It’s no less tragic for it though. There are so many musical artists who stick around and keep giving us more. I still think it’s tragic that there have been certain individuals who have lived at a particular pitch of intensity and left us with enduring gifts like music. But we don’t get to see what they would have created later down the line. You think about Bob Dylan and Bruce Springsteen and Paul McCartney and Mick Jagger. They’re still going and they’re still great. In the process of playing Hank, it occurred to me that I wish I heard the songs he had written as an older man. But, nevertheless, the fact that he was one of those stars that burned twice as bright and not for long has become part of who he is. Hank has become frozen in time [with] that unique sound and those songs. That’s why he has such a powerful legacy.

If you had the chance to ask Hank something about his life, what would you have liked to ask him?

Why was it so important for you to sing his music yourself? Was it all about authenticity?

Yeah, I thought if I was going to dress as Hank and speak as Hank and play out scenes from his life and from his marriage, it was so important for me to sing as Hank. It would’ve been a break in interpretation [if I hadn’t]. To me, if I had been playing an Olympic sprinter, but I hadn’t done any sprinting, that would’ve seemed inauthentic to the job. I was playing someone who, for him, singing was like breathing. He wrote music and got up on stage and made music. It was meat and drink to him. That was part of the interpretation and my exploration of who this man was. There was no way I was going to lip sync this, even though I knew I wasn’t going to get close to his sound. I don’t think anybody sounds like Hank. But at least I could try and transmit the power of his music by investing myself in the sincerity of his songs.