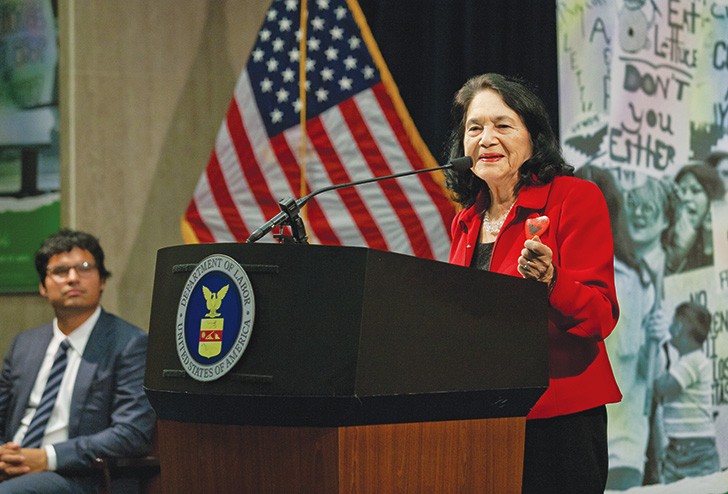 There are few people alive who can lay claim to decades of activism that changed history as much as Dolores Huerta.

At 85, Huerta witnessed the Civil Rights era. She is arguably one of the most influential labor leaders of all time, having co-founded the United Farm Workers with César Chávez in 1962. Following a savage beating at the hands of San Francisco police officers in 1988 at a peaceful protest against George H.W. Bush's candidacy for the presidency, Huerta recovered and then aimed her wisdom and grit on women's rights and encouraging Latinas to run for office.

In late March, Huerta was kind enough to take some time and chat with us about the importance of Planned Parenthood, women's rights and her thoughts on today as compared to her experience during the Civil Rights era and more. The interview is edited for clarity and length.

Why did you agree to speak at the Planned Parenthood South Texas luncheon?

Well, I'm quite honored to be invited to speak at that event, actually. Planned Parenthood is a great organization that does so much good and provides so many services all over America, and it's an organization I hold in high esteem. It's a great honor. Any woman would feel the same as I do.

Have you ever met Planned Parenthood President Cecile Richards?

Oh, I've known Cecile for many many years, and I knew her mom and her kids.

Texas has relentlessly attacked Planned Parenthood. Most notably with the notorious 2013 law HB2 that requires abortion doctors to have hospital-admitting privileges and clinics to meet ambulatory surgical center standards. As you know, that law is in the hands of a Supreme Court sans one judge. What do Texans need to do to stop laws like HB2 before they end up at the Supreme Court?

We have to continue educating people on the importance of voting. That's one of the many laws. I was in Corpus Christi, Texas, last November and people were telling me horror stories where women had to travel hundreds of miles to get to a clinic, which costs an exorbitant amount of money for a safe procedure. Women have to rise up and organize families, neighbors and get people registered to vote and get some decent people elected to the Legislature in Texas. It's in our hands. It's in our hands to change this situation.

What do you think about Sen. Ted Cruz and Donald Trump?

Well, either one of them would be a disaster because they both came out adamantly about defunding Planned Parenthood. Trump's a misogynist. He's demeaning to women, and I hope women are paying attention.

What can you say about the state of affairs in America today through the lens in which you saw the same country during the 1960s?

Well, in some ways, things are similar. And in some ways, they are very different. I think the scary thing is the way that the Congress and state legislatures are captured by people like the Koch brothers, right-wing billionaires who are putting so much money into campaigns to support their personal interests, like coal and petroleum. We have a real threat to our democracy. People like Ted Cruz and Donald Trump and the violent statements they've made reminds you of Hitler. He came out with the same kind of rhetoric and the action, with the killing of millions of Jews. We're in a very very dangerous moment and leading up to this are all of the other fascist tendencies that we have been accumulating by having so many people in prison, everything being illegal and those people espousing and supporting those racist comments Trump has been using against Muslims, Mexicans, disabled people. It's a very scary moment.

What would you say to young women navigating this hostile landscape of politics and misogyny?

Well, I think a lot of young women don't realize the danger that they are in because they take a lot of things for granted and are not understanding that so many rights can be taken away from us in the U.S. by legislators and Congress and at the Supreme Court level — whether Planned Parenthood can perform abortions at clinics in Texas — so many rights have been fought for, like Roe. V. Wade, and these can be taken away from us. Young women need to pay attention and get involved. Rights won in the past can be lost.

President Barack Obama awards Dolores Huerta in 2012 with a Medal of Freedom.

There's a lot of negatives out there, from HB2 to people like Trump and more. Are there bright spots in the realm of women's rights?

Well, I think one of the good indicators that women are paying attention is that Hillary Clinton, right now, is ahead in the polls and in the delegates she's been able to win. And going back to the '60s, where you may have had one or two organizations, now there are dozens, if not hundreds, all over America fighting for women's rights. There are more women in legislatures and in Congress. So we're inching up. At this pace, it will take about 200 years for gender equality. And we need to make sure that the women elected are feminists who stand up for equal rights for women, the LGBT community, climate change, immigrant rights, worker rights, union rights. There is still a long way to go, and we need to empower women to know that, yes, they can be office holders and decision makers.

We see a lot of headlines about state and federal level efforts to restrict access to Planned Parenthood's services and to defund the organization. But more nuanced efforts happen on the local level. For instance, several San Antonio City Council members voted to approve a zoning change that would make more hoops for ambulatory surgical centers — like say, a dentist office or a Planned Parenthood clinic — to get approval before one can be built. What should San Antonians do about that?

People in those districts should remove them from office because they're not voting for constituents but for religion. We had a similar situation with one of our assembly people here who said he couldn't vote for equal rights or pro-choice because of his beliefs. He was voted out of office next election. Women should get out there and organize and field a candidate against people like that.

Anything else you'd like to say to our readers?