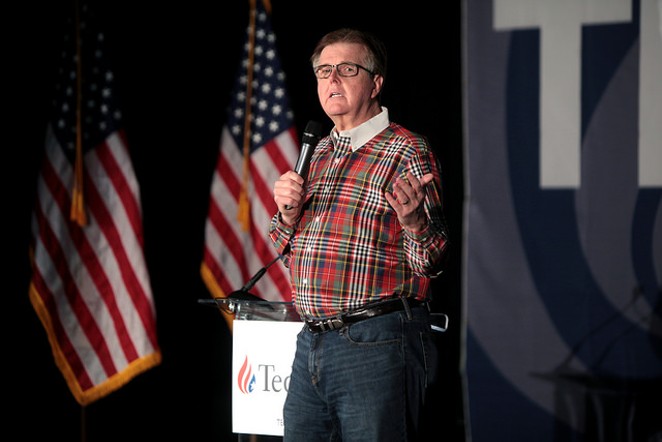 Flickr Creative Commons/Gage Skidmore
Lt. Gov. Dan Patrick stumping for Sen. Ted Cruz in February.
Texas can be a dangerous place for lots of folks, but especially children. Kids have suffered neglect and died in its foster care system, the state has one of the highest rates of children who are uninsured or lack enough healthy food to eat, and hundreds of kids are killed or injured by firearms here each year.

Yet Lt. Gov. Dan Patrick, backed by a broad swath of Texas Republicans, has set his sights on what he perceives as a different threat to the state's children: transgender-inclusive bathroom policies.

At a press conference yesterday asking for the attorney general’s opinion on a Fort Worth ISD policy allowing transgender people to use the bathroom of their choice, Patrick said he’d continue “to lead in the fight to protect the privacy, dignity, comfort and safety of young girls and women from local and federal regulations that defy common sense and common decency.”

It isn't empty rhetoric. In the next legislative session in January, Patrick will likely propose a bill like one passed in North Carolina (which may go before the Supreme Court) that bars transgender people from using the bathroom that matches their gender identity. Passing such "bathroom bills" in the name of common decency and safety has become a popular conservative cause in the wake of the Supreme Court's ruling on same-sex marriage last summer.

But not only is the concept of sexual assaults in the bathroom by transgender people largely a myth, focusing on it detracts from other hazards faced by Texas kids. Here’s a list of some real ways in which Texas is dangerous for children — many of which Patrick has had a hand in crafting — that he could get cracking on instead:

- Firearms injured or killed about 500 Texas children in 2014. Instead of making it harder to procure a gun or safer to own one, one of Patrick’s biggest priorities in 2015 was to go the other way with legislation that made guns even more ubiquitous in public places.

- The agency responsible for safeguarding some of the state’s most vulnerable kids, Child Protective Services, has routinely failed to safeguard children in state custody from abuse and neglect. Recent media reports revealed that children in the agency’s care have died, been neglected or have slept in CPS offices with nowhere else to go. Caseworkers at CPS are saddled with impossible workloads. The average caseworker lasts about six months, according to the Dallas Morning News.

- It’s tough to be poor in Texas, and 25 percent of the state’s kids are. That’s among the worst rates in the country, rivaled only by other southern states such as Alabama and Mississippi. In a state that has long touted its economic wherewithal, over 1.5 million kids have been left behind.

- Kids in Texas are underinsured and underfed. It ranks 49th for the percentage of kids who have insurance, and 43rd for the number who are food-insecure, according to a recent report by the Center for Public Policy Priorities.

- Texas children in public schools are hamstrung by a funding system that, while technically constitutional according to a recent ruling, is functionally inadequate. Billions of state funds lost in 2011 cuts by the Legislature were never replaced, and Texas’ school kids suffer as a result. Educational attainment is a predictor of long-term income and health, and the broken school funding system paints a bleak picture for the future of Texas kids.

After Patrick held his press conference on Tuesday, LGBT advocacy group Equality Texas held its own nearby. Parents of transgender children spoke at the event, alerting Patrick to the fact that his actions could force their kids into potentially dangerous situations.

“We cannot stand silently by and allow our children to be targeted because of who they are,” said Amber Briggle, the mother of a transgender boy from Denton. “There is no controversy here once parents understand what we are talking about.”