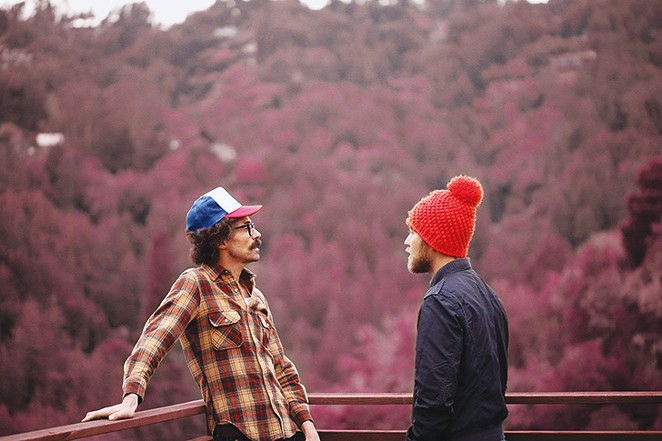 Spurgeon and Schultze survey the waves, or lack thereof.
The first time I heard Rogue Wave was on a sweltering, sunny day in the autumn of my youth. I was 18 years old and fresh out of high school with every opportunity in the world ahead of me. So, naturally, being the adventurous nomad I am, I was spending this formative time inside of my parent’s house watching Jenji Kohan’s debut series Weeds. This was a big episode. The pot-dealing mom’s oldest and most rebellious son Silas had just been dumped by his girlfriend. As he sat by the pool, moping about and searching for clarity in the water, deep and melodic guitar chords began to echo across my bedroom. Suddenly, someone started to coo out the most gut-wrenchingly truthful lyrics I’d ever heard. I remember thinking, “Wow, that is the most fitting song they could have played for that moment” and “I’ve got to know who that band is.” It was Rogue Wave and the song “Kicking the Heart Out” was off of their debut album Out of the Shadow.

Spearheaded by lead singer Zach Schwartz (aka Zach Rogue), the Oakland-based band has had their share of ups and downs since its 2002 inception. However, that hasn’t stopped Schwartz from propelling the group forward with a ferocity on par with the band’s namesake. Their discography is respectable, boasting six studio album releases in a little more than a decade, which may not seem like a staggering number but is hefty considering the fact that 12 musicians have joined and left the band in that time. Excluding Schwartz, drummer and percussionist Pat Spurgeon has been the only mainstay since the beginning. The reasons for past bandmate departures is largely unknown, yet a mixed cocktail of creative differences and grandiose prospects is suspected to be at play. In 2007, the duo was dealt a particularly bad hand when former bassist and friend Evan Farrell passed away from smoke inhalation during an apartment fire. They were later heavily featured in the Independent Lens documentary D-Tour, which chronicled Spurgeon’s lifelong struggle with kidney disease and dialysis while trying to record and tour. Spurgeon eventually received the kidney transplant he had been awaiting and has since been able to have less problematic jam sessions.

All of these trials and tribulations are important because they’ve spiritually, professionally and musically shaped who Rogue Wave is today. Each of their albums is distinctly different from the next and sounds like a diary entry written the morning after a life-changing event. For better or worse, Schwartz’s visceral and harrowing lyrics strike a chord with even the most closed-off and obdurate of listeners. While their impressive compositions have been wowing diehard fans since the beginning, it was the band’s third album, Asleep at Heaven’s Gate, that officially put them on the map alongside other indie rock heavy hitters like Death Cab for Cutie, Built to Spill and Modest Mouse. The album’s single, “Lake Michigan,” was an instant hit among Pitchfork-reading, tofu burrito-loving surfers everywhere. You can hear California when you listen to their music — and that’s not a bad thing. They manage to couple these laidback left coast vibes with a folky introspection that is cherished by people who drink pour overs and only shoot in film. Their latest release Delusions of Grand Fur explores a more seasoned and melodious side that was last seen on their fifth, reverb-inspired album, Nightingale Floors.

Against all odds, the band has continued to soldier on through rough winds and treacherous seas. Their story is an empowering and encouraging reminder to young musicians that what doesn’t kill you truly does make you more equipped to face the rogue waves that may infiltrate your shore.