Cheating Death: Catch the Resurrection of Lonely Horse This Weekend 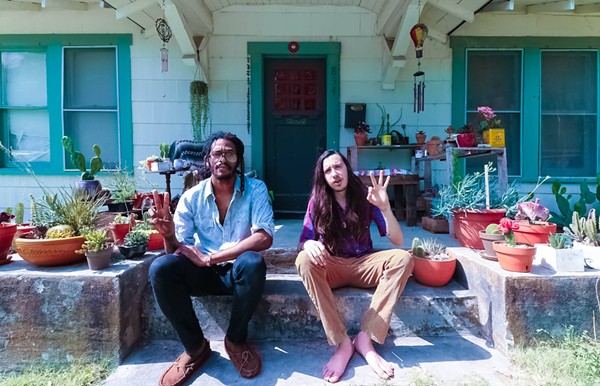 Guitarist Nick Long and drummer Travis Hild of the San Antonio blues/rock duo Lonely Horse have been through a lot over the past year — good and bad.


On one hand, the band saw plenty of attention after their win at the Afropunk Battle of the Bands in 2014. But the project ultimately folded after a bitter contract dispute with their label last year. They even billed a series of shows at Hi-Tones last December as their "farewell residency."


All of which was disappointing for fans who felt like Lonely Horse was on the cusp of doing something big. Still, Long and Hild stayed active in the local music scene, jamming with acts like Tides, the Bolos and the Bottomfeeders.


But for Long and Hild, Lonely Horse felt like unfinished business. Luckily for fans, the band's "farewell" turned into a mere hiatus when, earlier this year, they managed to get out of their label's contract.


Lonely Horse was calling once more.


With that newfound freedom, Long and Hild have not only resurrected Lonely Horse but given its music and entire new direction, the first taste of which can be heard on the band's first recording since its hiatus, which they'll release at Sam's Burger Joint this Friday.

The five-track EP, appropriately titled Death to Our Death, is a proud declaration of the band's spiritual and creative rebirth. While the songs themselves aren't bright, they feel infused with a positive energy that's apparent from the swagger of the opening track, "Hokah Hey." Long's lyrics (like, "It's a good day to die") take on a new meaning considering the band's recent, rocky history. The rhythms and heavy guitar tones are as tight and powerful as ever, while some songs (like "Aho" and "Like I Do") feature an intimate, somber and reflective moments that seem new.

Long says he feels the new the songs "have a lot of power," dripping with the all angst and emotions that came with the band's recent short-lived demise. "Like I Do," he says, is a track that means the most to him.  "It’s very relatable to people of color, particularly black people and red people. The song’s about if you build on a bad foundation, you’re going to regret not doing it the right way," he says. "That goes for our government, our nation, and even oneself as a person.”

With the new EP, it seems Long and Hild are now rebuilding that foundation for Lonely Horse.