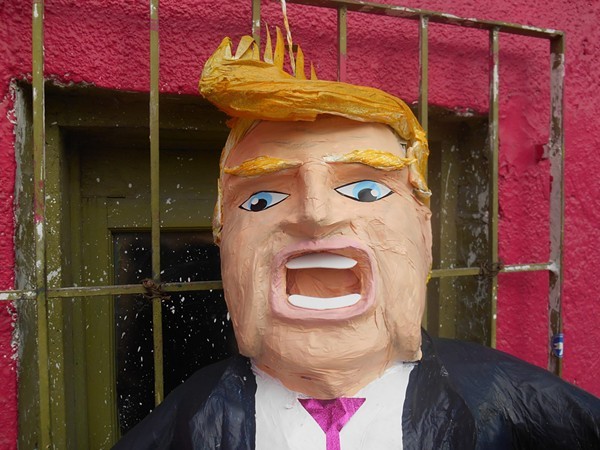 Pinateria Ramirez/Facebook
An original Trump pinata from Pinateria Ramirez.
The Republican presidential nominee who launched his campaign by calling Mexicans rapists will return to San Antonio next month to again raise cash in a roughly 60 percent Mexican-American city.

Invitations for the private October 11 fundraiser at downtown's Grand Hyatt peg the price of admission to the Trump Victory Fund benefit at a minimum $500 donation, according to the Express-News. Like the candidates's last swing through San Antonio, the daily reports that the fundraiser will be co-hosted by two local members of the Trump squad, IBC Bank Chief Executive Dennis Nixon and local real estate developer Gene Powell.

Donald "somebody's doing the raping" Trump made his first visit to San Antonio as a presidential candidate in June. His appearance at the Oak Hills Country Club drew hundreds of people either protesting Trump's presence in the Alamo City or offering their support (see photos of the protest here). Inside the closed-door event, former Texas Gov. Rick Perry, who once described Trump as a "cancer on conservatism" before joining the Trump bandwagon, reportedly helped introduce the Republican nominee at the event. It's unclear what, if any, state GOP dignitaries will attend October's fundraiser.

Trump's second stop in San Antonio is scheduled to take place two days after his next presidential debate against Democratic nominee Hillary Clinton. For anyone who wants a Trump piñata for the occasion, get 'em while you still can.