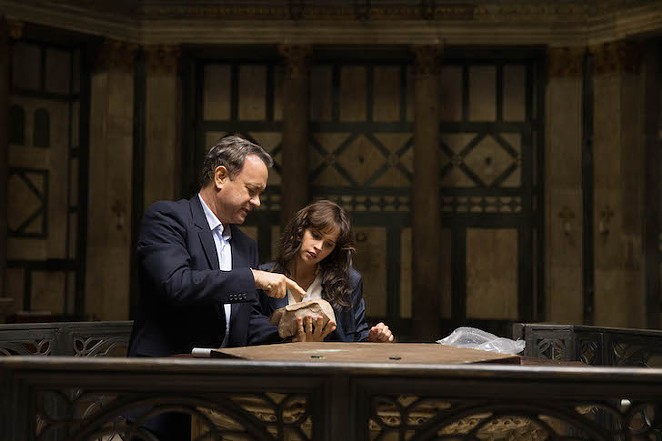 In Inferno, a billionaire mad scientist (Ben Foster) believes overpopulation will engender the end of mankind in 40 years, so he strives to restart civilization by creating a virus that could wipe out half the world’s population. Not sure about you, but I’d rather have 40 more good years than be dead, or living in a world full of corpses. And how does he know the virus will stop spreading at only half the world’s population?

Logical fallacies aside, Inferno is a briskly paced and smart action pic that keeps your mind and visceral senses fully engaged. Based on the novel by Dan Brown, and following The Da Vinci Code (2006) and Angels & Demons (2009), Professor Robert Langdon (Tom Hanks) wakes in a Florence, Italy, hospital with no memory of the last two days, but jarring headaches and visions he can’t explain. His doctor, Sienna Brooks (Felicity Jones), is a fan of his work who helps him escape after he’s attacked in the hospital.

They discover a tube in Langdon’s pocket that only his fingerprint can open, and it contains a painting of Italian poet Dante’s interpretation of Hell. In the painting are clues to the next clue, which lead to the next clue, etc. A wild goose chase ensues, all in an effort to find the virus within 12 hours and stop it from being unleashed into the world. Trying to find Langdon and Brooks – and maybe help, or maybe kill them – are World Health Organization officials Bouchard (Omar Sy) and Sinskey (Sidse Babett Knudsen), a private security honcho (Irrfan Khan), and a villainess on a motorcycle impersonating Italian police (Ana Ularu).

Ron Howard (A Beautiful Mind), who also directed the first two films in the trilogy, keeps our mental wheels spinning as he unspools one twist after another. Clearly he’s learned his lesson from the tedious pace of The Da Vinci Code, which took a dynamic page-turner of a book and turned it into a visual slog that fans endured rather than enjoyed. Like Angels & Demons, only better,  Inferno deftly mixes the lore of history with Langdon’s intelligence and ability to wiggle out of perilous situations. This is probably the only trilogy in which the films get progressively better deeper into the series; usually it’s the opposite, i.e. all downhill after the first movie.

A few weeks ago, I complained that Rachel (Emily Blunt) in The Girl On The Train was not a reliable protagonist because her memory issues and alcoholism distorted truth from reality. The argument was if we can’t trust what we’re seeing, it’s hard to get emotionally invested in the characters. With Langdon here, though, it’s different. His “visions” are clearly in his head – they’re never perceived as his current reality. What’s more, they’re part of a phase he goes through and are soon an afterthought as the plot surges forward. Plus, after two movies Langdon has earned enough credibility with the audience to be believed, regardless of how dubious his thoughts may seem.

Admittedly, when you get home you may find yourself asking questions that start with “How did Langdon…?” And that’s fair, because it’s a complex puzzle of a story. As you’re watching it, though, it makes perfect sense, and more importantly is perfectly satisfying by the time the end credits roll.