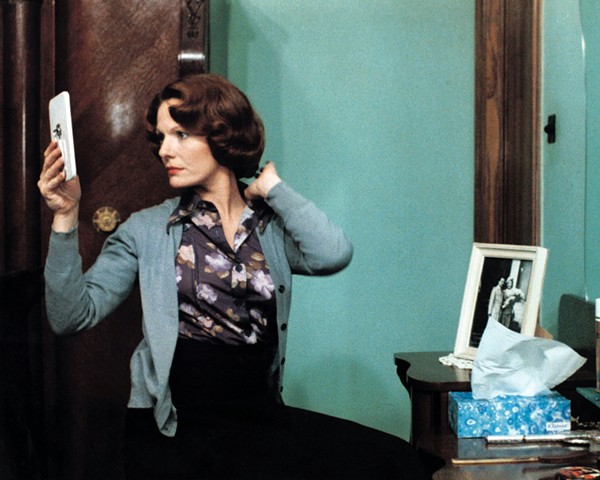 Janus Films
In a 2009 article titled “Then as Now, the Terrors of the Routine,” The New York Times drew an unlikely parallel between Orson Welles and Chantal Akerman as both were just 25 when they directed masterpieces that cast long shadows over their careers. While Akerman’s slow-moving opus Jeanne Dielman, 23, quai du Commerce, 1080 Bruxelles (1975) is unlikely to pop up on quite as many “Greatest Films of All Time” lists as Welles’ iconic powerhouse Citizen Kane (1941), it’s epic in its own peculiar way and visibly influenced many of today’s most revered arthouse directors. Frequently described as “deadpan,” the three-hour-and-15-minute film stars French actress Delphine Seyrig as an obsessive-compulsive woman who lives alone with her son and meticulously balances her time between domestic rituals (shopping, cooking and cleaning with bizarre intensity) and prostitution. Taking the cinematic concept of “real time” to a level all its own, Jeanne Dielman invites viewers’ eyes to wander and investigate the space around the titular protagonist (as she kneads meatloaf, brews coffee, washes dishes), building tension from monotony and delivering an ending that’s nothing short of shocking. The McNay screens the enigmatic gem (in French with English subtitles) in conjunction with its Get Reel Film Series. Free, wine reception at 5:30pm, film at 6pm Thu, McNay Art Museum, 6000 N. New Braunfels Ave., (210) 824-5368, mcnayart.org. — Bryan Rindfuss