Greg Abbott killed the mask mandate. How else will he enable far-right conspiracy mongers? 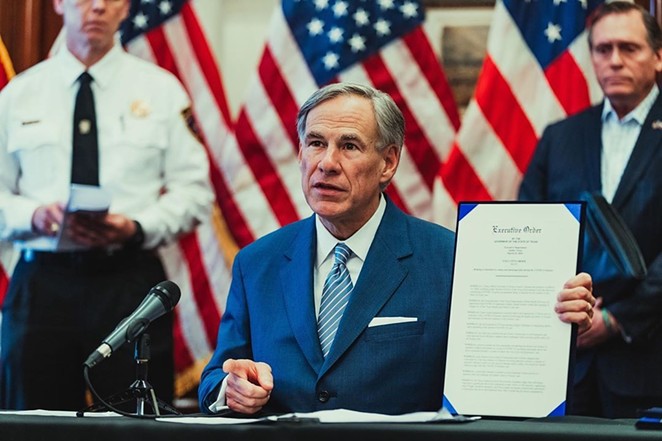 Instagram / governorabbott
Gov. Greg Abbott discusses an executive order during a 2020 press conference.
The following is Current Events, a column of opinion and analysis.

Call Gov. Greg Abbott’s elimination of Texas’ mask mandate “neanderthal thinking,” as President Joe Biden did. Or call it a political acquiescence of the most craven and cynical kind.

You’d be right in either case.

Abbott’s decision to strike down the mask rule on Wednesday, March 10, has no scientific basis. To be sure, three of the GOP governor’s four coronavirus medical advisers confirmed he didn’t directly consult them before announcing the move.

And there’s no economic justification either. The Wild West atmosphere it fosters will only make those Texans rightfully worried about contagion even more likely stay home and keep their dollars in the mattress.

The cruel reality behind Abbott’s action is that he’s not a leader but a political opportunist.

The governor is wagering that if can avoid a primary challenge from someone further to the right — Texas GOP Chair Allen West is certainly hinting at such a run — he’ll have the 2022 general election sewn up. After all, last November’s contest made it clear Texas isn’t yet a purple state.

Political observers point out that Abbott’s ambitions probably don’t end with the Lone Star State. He could chase the Republican presidential nomination as early as 2024. To do that, he’ll need the Trump base, many of whom still buy into toxic rhetoric that the pandemic is a hoax and masks are a hideous affront to American freedom.

While medical experts continue to maintain that face coverings are one of the most effective ways to curb the spread of COVID-19, masks have become one more partisan symbol for an increasingly unhinged far right.

The Texas Republican Party’s West has been particularly eager to depict masks as a symbol of overreach by the big, bad gubmint — and Abbott as their chief proponent. Three days ahead of early voting last November, West helped lead a protest outside the Governor’s Mansion to blast the mask mandate and other perceived pandemic overreaches by the building’s current occupant.

A one-term Florida congressman, West has made a political career as a bomb thrower, saying in 2009, “There are three words I hate to hear used. I hate ‘big tent.’ I hate ‘inclusiveness.’ And I hate ‘outreach.’”

Never mind that West’s math is off by one word, Abbott seems to have seized on the sentiment. In recent months, the gov has made plenty of efforts of his own to show that, like his potential primary challenger, he’s not Mr. Kumbaya either.

After seizing on law and order as a winning issue, for example, Abbott has issued racially charged — and likely empty — threats to have DPS take over the Austin Police Department and to slap harsh penalties on “rioters” at largely peaceful Black Lives Matter protests.

Given that hollow rhetoric, it may be tempting to write Abbott off as a windbag, another of the American right’s mouth-farting human Whoopie Cushions. But his posturing, particularly when it comes to the pandemic, has real consequences.

Texas businesses have warned that they’re bracing for confrontations with customers emboldened by the governor’s order, who will refuse to follow mask rules. Those same self-centered science deniers risk becoming sick themselves and worsening the spread of the virus as highly contagious new variants show up in the state.

Media reports suggest the Anti-Science Brigade’s harassment of businesses sticking by their mask rules is already underway. After a Mexican restaurant in Houston said it would continue to require customers to wear masks, it was bombed with social media nastygrams, including threats to report workers to immigration authorities, the Washington Post reports.

University of Texas at San Antonio mathematician Juan Gutierrez, whose research tracks the spread of the coronavirus, likens Abbott’s removal of the mask mandate to a statewide game of Russian roulette.

“Every week [without the rule], we add another bullet and spin the chamber,” he said.

As one could expect from a math professor, the numbers bear out Gutierrez’s argument. When Abbott rushed ahead to reopen Texas businesses last May, COVID-19 rates skyrocketed. And when he finally implemented a statewide mask order in July, the numbers edged down again — slowly but substantially.
But the health risk is just one consequence of Abbott’s cowardly actions. Experts warn to expect the governor to engage in further concessions to the far-right fringe as political season draws near.

The other tragic consequence of the governor’s continued complicity is that he’s become a superspreader in another dangerous pandemic: a disinformation pandemic.

“We have a secondary pandemic, one which is becoming a matter of national security, and that’s a pandemic of disinformation,” UTSA’s Gutierrez said. “This isn’t about party. It’s about an alternate reality.”

To be sure, that disinformation, eagerly lapped up by a substantial block of the Republican electorate, doesn’t end with the belief that COVID-19 is hoax.

The events of January 6 show that a terrifying number of Americans believe that one of the fairest and most secure elections in our nation’s history was a con job. That a shadow government run by satanic pedophiles is actually running the country. That the deadly Capitol insurrection fomented by GOP rhetoric and carried out by members of their own team was actually the work of Antifa infiltrators.

When Abbott caves to this constituency, Texans should make no mistake about the consequences: he’s handed the crazies the keys to the bus.