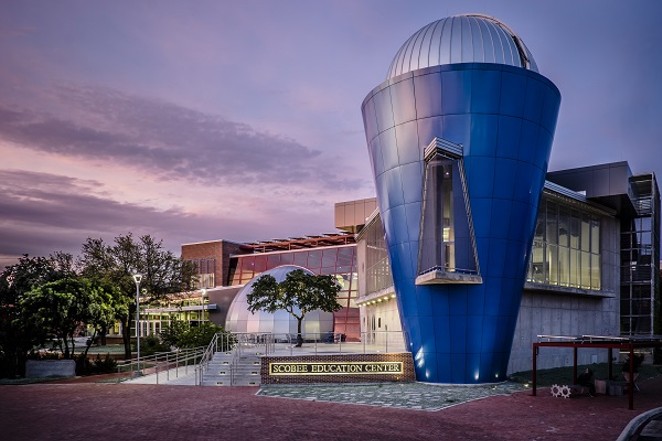 Photo Credit: Mark Sobhani
The Scobee Planetarium and Education Center at San Antonio College.
You already know Gem and Glenn Hotvet, the groovy husband and wife duo behind K23, as important (and decidedly psychedelic) curatorial forces on the local music scene. You already know they are up to exciting new adventures this year, branching out of their tiny (but mighty) DIY venue on Fredricksburg to bring us Psych Del Rio at the Arneson River Theater in September.

With their latest foray—a brand new concert series, which we are happy to announce—the Hotvets are really going far out. The new series, dubbed "Astral Projections," will be hosted at San Antonio College's Scobee Education Center/Planetarium and will feature live music of the (trippy as fuck) electronic variety and light shows (provided by The Mustachio Light Show).

Gem Hotvet told us the new series, which will run "every few months," will be focused specifically on bringing heady/trippy electronic acts to the star-study center. This series is an admirable and flat out exciting collaboration across disparate pockets of influence, and just the latest example of K23's penchant for envisioning truly special musical experiences. Plus, thanks to the folks at Freetail Brewing, there will be beer.

Gem said that "Astral Projections" is a part of the couple's "conscious decision to try some new things in 2017." Quoting Tom Robbins, a sort of spirit animal for K23, she explained that they have always been motivated by the notion that "at the higher levels, science and art are the same. There is a point where high science transcends the technologic and enters the poetic, there is a point where high art transcends technique and enters the poetic."

"We have always sought out artists whose form of expression realizes their vision perfectly and completely," Gem said. "So putting together an exhibition of this sort, in a space that so beautifully and artfully celebrates science, seems like a perfect realization of that [Tom Robbins concept]."

The inaugural (too soon?) show, which will feature Austin experimental electronic act Dallas Acid, is scheduled for April 1.

Courtesy
Dallas Acid is the good acid.
That Dallas Acid is the perfect group to launch this recurring trip to the stars is obvious with one listen to the album below, the band's most recent effort "Original Soundtrack." For Gem, Dallas Acid is ideal for "Astral Projections" because the band "paint[s] these rich, synthesized starscapes that are deep, dark, shimmering, and foreboding—every description you'll find of [the band] emphasizes this cosmic bent to [its] sound."

Tickets for the April 1 show go on sale February 1 and will run you $15 in advance and $20 dollars at the door—a mere pittance to pay for a trip that's out of this world.