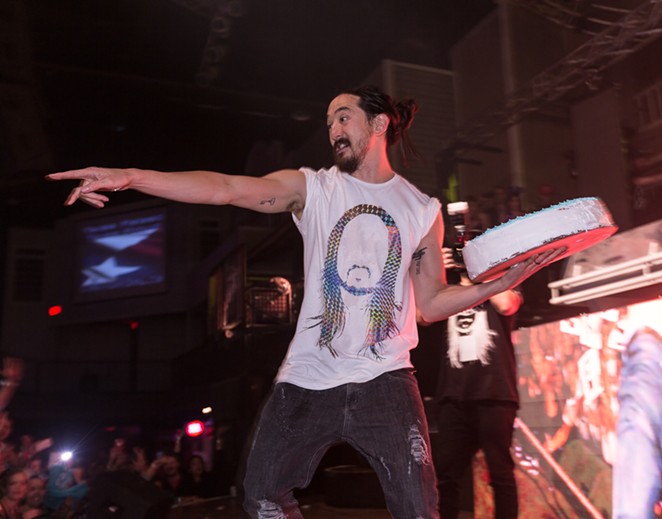 Noah Acevedo
Steve Aoki will be at Cowboys Dancehall on Sunday.
Nobody can say San Antonio live music options are limited this week. And, for that matter, they'd better not say they're not covering a lot of stylistic bases.

After all, music fans could take in the vocal stylings of local crooner Ken Slavin on Wednesday and get pelted with cake by top DJ Steve Aoki on Sunday while checking out a finalist from The Voice and huffing stoner rock riffs in between.

Wednesday, May 26
Ken Slavin
The renowned local crooner is making his post-pandemic return with this performance. Slavin has drawn accolades from all over the world and made the tour rounds as well, headlining concerts from Alaska and Mexico. A seasoned performer with a love for the Great American Songbook, he celebrated his 30th anniversary as a live artist last year. $20-60, 8 p.m., Sam’s Burger Joint, 330 E. Grayson St., (210) 223-2830, samsburgerjoint.com.

Friday, May 28
Thunderstorm Artis
This finalist from the spring 2020 season of The Voice made his initial splash on the show with a cover of “Blackbird” from a little group called The Beatles. Since then, he’s performed at the wedding of Crazy Rich Asians director John M. Chu. His most recent single “The Prayer” dropped in December. $25-150, 7 p.m., Sam’s Burger Joint, 330 E. Grayson St., (210) 223-2830, samsburgerjoint.com.

Saturday, May 29
Rickshaw Billie’s Burger Patrol
This unusually named Austin outfit released the equally unusually named LP Burger Babes… From Outer Space! in 2020. The core of the band’s sound is stoner rock. However, it also displays some of the more off-kilter qualities of Queens of the Stone Age, from oddly phrased riffs to not taking themselves too seriously. $10, 8 p.m., Paper Tiger, 2410 N. St. Mary’s St., papertigersatx.com.

Sunday, May 30
Giant Fricken Laser Kitties with Steve Aoki
Put on your dancin’ shoes and get ready to move. Aoki is one of the best-known DJs out there, and not just because his signature move is throwing a whole cake at an audience member. He tours heavily, often playing hundreds of dates a year. In addition, he’s remixed tracks for superstars including Drake and Kanye. Of course, the location of this show is subject to change, pending the actions of the San Antonio Fire Marshal over an oversold performance at the venue over the weekend. $35-60, 8 p.m., Cowboys Dancehall, 3030 NE Loop 410, (210) 646-9378, cowboysdancehall.com.