Assclown Alert: The John the Baptist of conspiracy theories brought his schtick to Texas 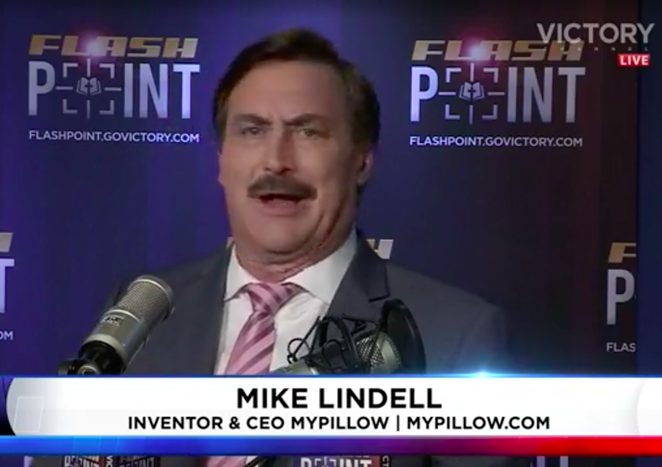 YouTube / Flashpoint
Pillow peddler Mike Lindell assures us his "cyber guys" are working around the clock to put Trump back in office.
Assclown Alert is a column of opinion, analysis and snark.

You can almost always count on assclowns breaking news at the National Religious Broadcasters convention. And right-wing evangelist Hank Kunneman and MyPillow guy Mike Lindell certainly didn’t let us down at the NRB’s annual gathering last month in Dallas.

During a live taping of the show Flashpoint, the conspiracy-peddling pair egged each other on as they tried to good naturedly one-up each other in their favorite pastime: pretending Donald Trump won the 2020 election, Right Wing Watch reports.

Kunneman — a self-declared prophet who incorrectly called the 2020 election for Trump and just can’t seem to let it go — fell all over himself to praise Lindell for his continued peddling of Trump-won conspiracy theories, according to the news site. At one point, Kunneman even likened the pillow salesman to John the Baptist.

We’re not sure that any higher authority — biblical or not — would use the word “truth” to describe the pipedreams and prevarications Lindell has spent months spreading.

But, hey, it’s living. Or something.