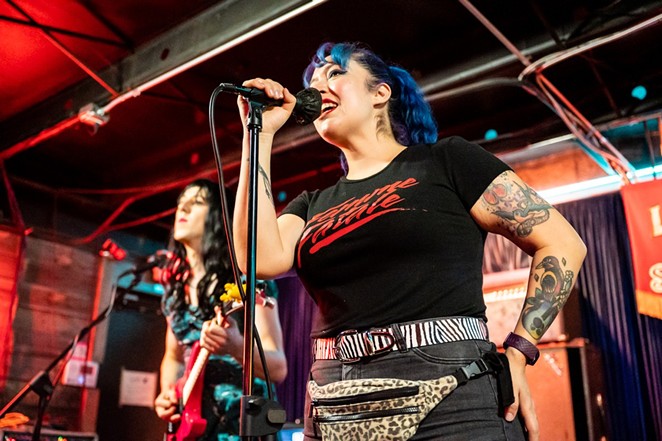 Jaime Monzon
FEA joins the bill with Joan Jett at Floore's Country Store on Sunday.
Whether it's a female rock icon playing a storied country venue or a tribute act hitting a gorgeous downtown theater, music fans have an eclectic choice of performers to check out this week — at an equally eclectic array of venues.

Though he will likely always be known as the son of you-know-who, Wallflowers frontman Jakob Dylan has certainly been successful in his own right. The alt-rock band’s profile was highest with 1996’s Bringing Down the Horse album, which featured the hits “One Headlight” and “6th Avenue Heartache.” Now, the band is back with last month’s Exit Wounds, its first album in a decade. Dylan recently voiced feelings that many are experiencing: relief that live music has returned, at least for now: “I think we’re all really going to appreciate being in that room, maybe more than we did before — the audience and the artists,” he told Cleveland.com last week. $55, 8 p.m., Gruene Hall, 1281 Gruene Road, New Braunfels, (830) 606-1281, gruenehall.com. — Mike McMahan

Joshua Alderete and the Fellowship

Local percussion master Joshua Alderete blends the sounds of jazz’s past and present, and he’s ably assisted by local trio the Fellowship, who provide piano, bass and saxophone. The show has limited seating and the dimly lit underground venue will also have a brand-new menu of cocktails and food. $20, 7:30 p.m., Jazz, TX, 312 Pearl Parkway, Building 6, Suite 6001. jazztx.com. — EB

This Mexican cover sextet is bringing its love of ’80s Brit-pop and Latino sounds to the Aztec. Originally brought to life with the help of Latina superstar Belinda, the group has since landed its own national television show MatuTV. In recent years, it’s also topped the Mexican pop charts. $49, 8:30 p.m., Aztec Theatre, 104 N. St. Mary’s St. theaztectheatre.com. — EB

Describing his music as “guitar-driven Texas country,” Alan has focused on singles in the past couple of years, releasing “I’m Going” and “Love You the Same,” as well as an instrumental cover of Willie Nelson’s “On the Road Again.” Though focused on a country sound, he cites more diverse influences including Dire Straits, Jimi Hendrix and vaccine fan Eric Clapton. Alan expects to release his next LP in 2022. $12-$50, 7 p.m., Sam’s Burger Joint, 330 E. Grayson St., (210) 223-2830, samsburgerjoint.com. — MM

After rising to fame after making her debut on the TV show Nashville Star and marrying Blake Shelton, Lambert has made a name for herself through hits including “Mama’s Broken Heart” and “Little Red Wagon.” Her three-day stint in New Braunfels feels like a mini-Las Vegas residency — but country style. $72, 8 p.m. Friday-Sunday, Whitewater Amphitheater 11860 FM 306, Suite 1, New Braunfels, (830) 964-3800, whitewaterrocks.com. — BE

If you know your dates in rock ’n’ roll history, you know 1964 likely means one thing: The Beatles. Tribute act 1964 toes the line between a concert and theater, creating an undeniably engaging experience. Rather than trying to tell the whole Beatles story — particularly the LPs released after the band’s touring years — 1964 transports the audience to a Beatles concert circa 1964. In the end, it succeeds in creating a “you are there” historical vibe. There’s a reason Rolling Stone called 1964 “the best Beatles tribute on Earth.” Hyperbole, perhaps, but the group does offer a compelling snapshot of rock’s Golden Age. $34-$49, 6 p.m., Majestic Theatre, 224 E. Houston St., (210) 226-5700, majesticempire.com. — MM

Joan Jett doesn’t give a damn about her bad reputation. In fact, we’re guessing that rep is actually a draw for folks heading out to Helotes for this very rocking show and a very country venue. Well, that and the chance to watch Jett prove once again how tough she looks on stage. If Joan alone isn’t reason enough to draw out local rockers, San Antonio all-female punk outfit FEA — mentees of Jett herself — are also on the bill. $40, 7:45 p.m., John T. Floore’s Country Store, 14492 Old Bandera Road, Helotes, (210) 695-8827, liveatfloores.com. — BE