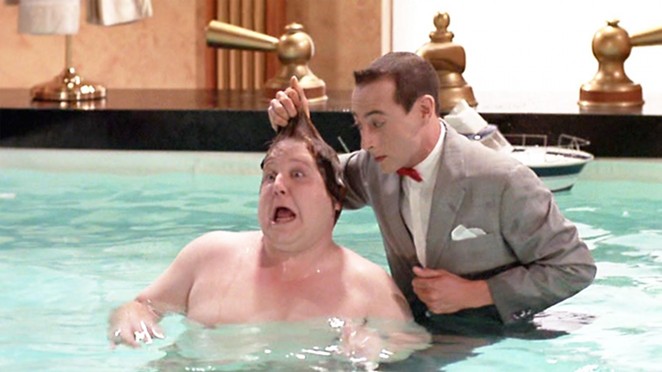 Warner Bros.
Francis' Big Adventure: Mark Holton finally makes a trip to San Antonio to be the Guest of Honor at this year's Burton Ball.
Years after making a name for himself in some of the most memorable movies in the 1980s — Pee-wee’s Big Adventure, Teen Wolf and The Naked Gun, to name a few — Mark Holton was ready to call it quits as an actor. In 2015, he and moved his family out of California and back to his home state of Oklahoma where he planned to lay low.

Hollywood, however, had different plans.

When filmmakers contacted Holton to reprise his role from the 1993 horror flick Leprechaun, the industry he thought he’d escaped reeled him back in. Before he knew it, he was in South Africa shooting the 2018 SyFy movie Leprechaun Returns, the franchise’s eighth installment.

Three years later, Holton is making his first-ever trip to San Antonio to serve as Guest of Honor for the 10th Annual Burton Ball, the longest-running Tim Burton-themed event in Texas.

Holton, of course, starred in Burton’s first feature film, the 1985 cult classic Pee-wee’s Big Adventure. In the movie, he plays Pee-wee’s archnemesis, the man-child Francis Buxton, who covets the protagonist’s bicycle. Holton initiates the events that lead to Pee-wee’s “big adventure” by hiring someone to steal the prized bike.

The Burton Ball takes place October 16-17. Saturday night is the traditional evening party followed by Family Day on Sunday. The event will include live music, carnival games, food trucks, costume contests, vendors and more. Holton will be on hand for photos and autographs.

During an interview with the Current, Holton talked about visiting San Antonio for the first time and even sang a few bars from a scene in Big Adventure.

How excited are you about attending the 10th Annual Burton Ball?

Very excited. All of this is new to me. You start throwing in the magical words “Guest of Honor” and, my goodness, when will that ever happen in my lifetime? I’m walking on clouds.

Everyone loves Pee-wee’s Big Adventure, but San Antonians seem to have an even bigger connection to it, of course, because of the Alamo basement storyline. When did you realize it was such a popular movie here?

When Paul [Reubens] was doing his grand tour back then, I realized it was popular all over Texas! I went to Dallas with him to one of those beautiful, historical theaters, and I saw Big Adventure with a huge Texas crowd, which is the only way to see the movie. It was such a mind-blowing experience. There are so many moments in the movie that audiences can seize on. (Singing) The stars at night / are big and bright / Deep in the heart of Texas.

Did you ever think when you were making the movie 36 years ago, that we’d still be talking about it?

After nearly four decades, it seems like the film is more popular now than it ever was. It has more fans than it did in 1985. I have people coming up to me at conventions saying, “I remember the first movie my father ever played for me was Big Adventure … and now we’re playing it for our grandchildren.” You’ll have three or four generations in one family who are fans now. I think the bones of Big Adventure have never been sturdier.

Are you at all surprised that you never worked with Tim Burton again? It seems to me that you would have fit well in some of his other movies.

It was something of a given that we would work together again. I know there were plans for a Part 2 and that I was definitely part of those plans. I thoroughly expected to work with him again, but it never happened. I remember he wanted me to read for Beetlejuice, but he never managed to get me a script. The world just spun off in a different direction.

How is it that after all these years, you’ve never been to San Antonio?

Oh, it’s criminal! It’s somewhere I’ve always wanted to go since I was a little kid. It’s going to be great to get over there and get that vibe. I really want to immerse myself in it.

Can you share a story about the late Phil Hartman, who co-wrote Big Adventure?

Phil was always on the set when I was. He wanted to see what I had in store for that day. He was there the night they yanked me off the bicycle and flew me across the screen. There [were curse words] coming out of my mouth I didn’t even know I knew. I’d be way up there, and there was Phil Hartman, the size of an ant, laughing like a lion.