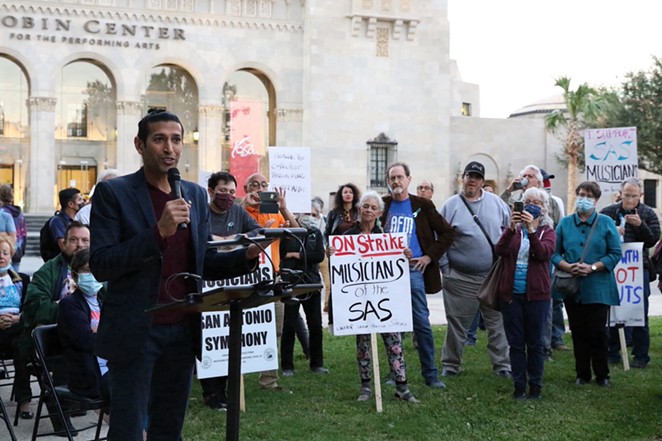 Katelyn Earhart
Musical Bridges Around the World’s Suhail Arastu speaks in support of the striking Symphony musicians at a rally in front of the Tobin Center Friday, Oct. 29.
The San Antonio Symphony was to have held its first performances of the season by now. Instead, its musicians are a month into a strike over unilaterally imposed contract terms they call unfair and detrimental to the orchestra.

Last week, as the latest development in that dispute, the Symphony Society, the orchestra’s managing body and musicians’ employer, canceled the performers’ healthcare benefits, effective Nov. 1.

While the Symphony Society has released multiple statements declaring its love for the orchestra and its willingness to negotiate, the performers paint a much different picture.

Path to the picket line

Amid the pandemic crisis in 2020, the Symphony’s musicians agreed to a new contract that covered the 2020-2021 season, for which they voluntarily took an 80% pay cut. Included in that agreement was the option to reopen the third year of the CBA, which management subsequently requested.

When contract negotiations began again this fall, the musicians were shocked by the drastic cuts included in proposals from management. One such offer would have slashed all performers’ salaries by half, with additional cuts to health insurance benefits.

While the clause allowing for talks to reopen was tied to the pandemic crisis, the Symphony Society has made multiple public statements indicating that its austere contract proposals were presented in the pursuit of what it purports to be “a sustainable artistic and financial future.”

“To stabilize the organization and sustain it for the future, the Symphony must hold strong to only spending what we can afford,” Symphony Society Chair Kathleen Weir Vale said in a statement emailed to the Current in late September.

On Sept. 26, the Symphony Society declared an impasse and imposed the terms of what it deemed its “Last, Best and Final Offer,” which would cut the ensemble’s 72 full-time members to 42, converting 26 positions to part-time and eliminating four currently unfilled positions.

That proposal had previously been rejected in a unanimous vote by the Symphony’s musicians.

As a result of the imposition of terms, the San Antonio chapter of the American Federation of Musicians (AFM) called a strike Sept. 27. 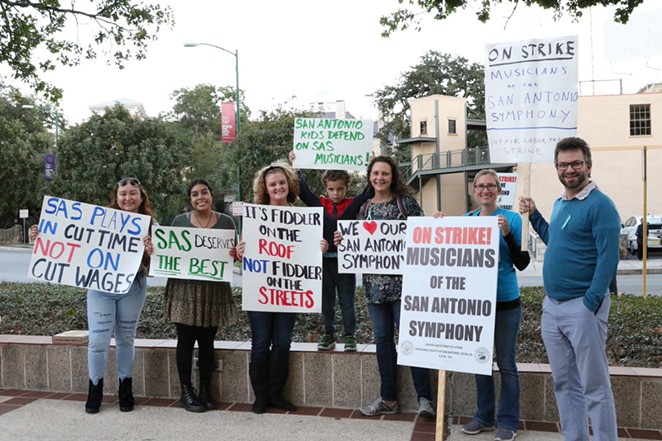 Martin Gordon moved his family to San Antonio in September 2020 to take a full-time position playing contrabassoon and bassoon for the orchestra. He auditioned for the position in January 2020, prior to the onset of the pandemic.

Under the “Last, Best and Final Offer,” he would be downgraded to a part-time position, facing a loss of benefits and a pay cut of approximately two-thirds from what his salary would have been under the 2019 CBA. Gordon described the pay cut as “untenable.”

“This job becomes, at that pay level, almost a financial albatross, because you’ll make nothing, and it will prevent you from being able to supplement your income,” he said.

“This is an obliteration of the artistic structure of the orchestra, because the jobs are now not even possible to do and financially survive because of the time commitment and the lack of pay.”

At 4:51 p.m. on Oct. 28, Director of Orchestra Operations Sara Vreeland notified the musicians via email that the Symphony Society was ending their healthcare benefits effective Nov. 1.

The Symphony’s assistant principal second violinist Karen Stiles, a single mother of a college-aged daughter, told the Current that she had to scramble to find a new plan immediately after learning of the lost benefits. A recent cancer survivor, both she and her daughter have ongoing health concerns that make the abrupt loss of coverage catastrophic.

“I am angry that the Symphony management chose to notify us of the cancellation at 4:51 p.m. on Thursday, leaving us only one business day to scramble to fend for ourselves,” Stiles, a member of the orchestra since 1991, said via email. “They did not properly have COBRA in place for us, and I was unable to put my daughter on the UT student insurance plan because no official letter of termination has been provided.”

At press time, the Symphony Society had not responded to a request for comment regarding the missing paperwork.

“I have never felt so disrespected by our management and board,” Stiles added.

In a statement supplied to the Current on Oct. 29, the board indicated that striking employees don’t earn wages and aren’t eligible for benefits. However, it added, “the Symphony carried employee benefit offerings through the month of October.” The statement asserts that “employee benefits will be forced to change on Nov. 1, 2021, to conform with the implemented contract,” referencing management’s imposed terms.

Both Vreeland’s email and the Symphony Society’s statement characterize the loss of coverage as an unavoidable consequence of the strike, but Musicians of the San Antonio Symphony (MOSAS) Chair Mary Ellen Goree and the group’s attorney, David Van Os, both construe the move as retaliatory.

“Since the current contract [2019 CBA] does not allow the cancellation of accrued benefits, it is an act of illegal retaliation against the musicians for exercising their lawful right to strike over unfair labor practices,” Van Os said in a statement.

Goree told the Current she’s been privy to a “private communication” on the subject between Symphony management and a musician. Paraphrasing the exchange, she said management implied that continuation of health insurance was “up to the orchestra committee.”

“They couldn’t have made it more plain that the cancellation of our benefits is retaliatory for the strike if they had spelled it out in so many words,” she said.

The Symphony Society didn’t respond to a request for comment on the alleged exchange.

“We are eager for the union to come back to the bargaining table so we can work together to move past this,” the Symphony Society said in its Oct. 29 statement.

However, Goree says negotiations have remained at a standstill for weeks because management won’t accept the musicians’ terms for resuming talks.

“We told [Symphony Executive Director Corey Cowart] the conditions under which we would return, which included the retraction of their so-called ‘Last, Best and Final Offer’ and the lifting of the imposed terms, and he declined those terms,” she said.

Goree said it’s up to the Symphony Society, not the musicians, to restart talks.

“I reject any suggestion that the musicians are in any way responsible for the current lack of movement in negotiations.”

The strike’s resolution remains uncertain, but one thing is clear: deep wounds have been opened and they’re unlikely to be repaired by simply ratifying a new contract.

Goree, Gordon, Stiles and other Symphony musicians expressed incredulity, despair and a sense of betrayal when speaking to the Current about management.

“I’m extremely disappointed to see how they’ve lost track of their humanity somewhere in this mess,” principal oboist Paul Lueders said via email.

“I still am in disbelief that our board and our management are so evidently willing to completely blow up such an artistically respected orchestra and such an integral part of our community as the San Antonio Symphony,” Goree said.

“I can’t believe that this is the legacy that they want to leave.”