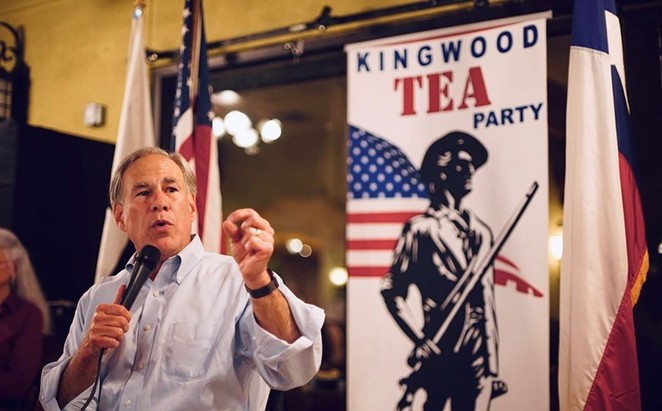 Instagram / governorabbott
Gov. Greg Abbott speaks last month at a Kingwood Tea Party event. The governor has made frequent massless appearances in recent months.
As other states are mobilizing to respond to the rapidly spreading omicron variant, Gov. Greg Abbott is not budging on his hands-off approach to the coronavirus pandemic that was cemented months ago.

In March, Abbott ended the statewide mask mandate, marking the beginning of a sharp shift toward preaching “personal responsibility” and an outright rejection of any government mandate — whether state or local — to curb the pandemic. That philosophy carried the state through the delta variant this fall, even as hospitals were overrun and deaths climbed. Now as the state stares down the latest variant, Abbott remains unmoved, continuing to rule out any mask or vaccine mandates and business shutdowns.

“We’re moving forward with life as we know it,” Abbott said Tuesday in a radio interview when asked about omicron.

Abbott’s insistence on the status quo comes as the state begins to see a rise in some key pandemic metrics, including daily new cases and the positivity rate, or the ratio of cases to tests. That rate hit 14.6% on Tuesday, part of a swift trajectory upward and above 10%, the threshold that Abbott has previously identified as worrisome. Hospitals have not yet seen a notable increase in cases, however, medical officials say they’re bracing for a possible post-holiday surge.

Asked Tuesday what the state is doing to address omicron, Abbott’s spokesperson Renae Eze said in a statement that the governor recently got a briefing on the state response to the variant by John Hellerstedt, the commissioner of the Department of State Health Services, and Nim Kidd, chief of the Texas Division of Emergency Management. Eze otherwise gave no indication the state was doing anything differently, saying it was continuing to respond to the pandemic by “setting up therapeutic infusion centers, ramping up COVID vaccination efforts, and providing surge staffing and medical equipment to hospitals and nursing homes.”

Eze ended by calling vaccination the “best defense” against COVID-19 and encouraging Texans to get immunized.

Even as Abbott’s office says it’s prioritizing vaccines as the best defense against COVID-19, the state’s vaccination rate lags nationally. As of Monday, 56% of Texans were fully vaccinated, placing Texas in the back half of the 50 states when ranked by vaccination rates.

Abbott got vaccinated on camera late last year and has encouraged Texans to get the shot. But he does not go out of his way to promote vaccinations and he has expended much more energy in recent months fighting vaccine requirements by local and federal officials.

Abbott has been virtually silent on the booster, which the U.S. Centers for Disease Control and Prevention said last month every qualifying adult should receive. The word “booster” has never appeared on Abbott’s personal Twitter account, and a spokesperson did not respond when asked whether the governor has received a booster.

As of Monday, 14.4% of Texans had gotten boosters.

State Rep. Chris Turner, chair of the House Democratic Caucus, acknowledged Abbott has encouraged vaccines on some occasions but said he needs to do so “more often and more loudly.”

“If Gov. Abbott spent half the time promoting vaccines and boosters as he spends fighting local governments and businesses when they’re trying to protect their constituents or employees or students,” Turner said, “I think we’d be in a much better place.”

The Department of State Health Services has been more active in encouraging vaccination, as well as boosters. On social media, it has shared video testimonials from people who were initially reluctant to get the vaccine but ultimately received it.

“With the holidays around the corner and Omicron spreading, DSHS recommends getting fully vaccinated and a booster shot,” the agency said in a tweet last week.

Meanwhile, the federal government and some other states have sprung into action as the new variant has cropped up. President Joe Biden announced Tuesday the federal government would buy a half a billion at-home rapid tests to distribute for free to Americans. A number of states have extended or declared a state of emergency. And several major cities have announced plans to require vaccination proof to enter indoor spaces.


There has been no comparable mobilization by Abbott, who has not held a news conference on COVID-19 since March and has been prioritizing other issues in the public recently, like border security. On Saturday, Abbott traveled to Rio Grande City to debut the beginning of a state-built border wall.

Texas’ COVID cases are trending upward after the state reported an average of more than 6,000 confirmed cases every day in the last week.

“The case data suggests that we have entered another COVID surge much like we’re seeing around the world with the emergence of omicron,” said Lauren Ancel Meyers, director of the University of Texas COVID-19 Modeling Consortium. “We’re not yet seeing hospitalizations coming up, but that could follow shortly behind.”

Meyers said there is still “a lot of uncertainty” about how omicron will play out in Texas, particularly when it comes to how severe cases will be. But given the rising case numbers, she added, “if ever there was a time to err on the side of caution, now is the time.”

As the cases rise in Texas, a familiar tension is reemerging between local officials and Abbott, who has restricted them from doing things like requiring masks, mandating vaccines and scaling back business openings.

“I think the answer is very simple,” said KP George, the judge in Fort Bend County in suburban Houston, where cases have increased by more than 300% in the last two weeks. “As the governor and his party have said in the past, let the local government do their job. Texas is a large state and something important in Fort Bend County may not be important in the Panhandle or some other place.”

Speaking Wednesday afternoon, George said there was not a specific virus-fighting tool that he wanted the state to allow local officials to use again “because we are still analyzing numbers” and learning more about omicron. He said it is “not at all” a priority for him to shut down business or issue mandates generally, but “moving forward, I will do anything possible I need to save life.”

Hours after George spoke to a reporter, George announced he had tested positive for COVID-19. He said he is fully vaccinated and was not experiencing any symptoms.

There is at least one preliminary sign that omicron poses a unique challenge to the pandemic playbook that Abbott has clung to. While Abbott has championed monoclonal antibody treatments for COVID-19 patients, some hospitals in Houston have temporarily suspended them because they believe they are ineffective against the latest variant.

One health system, Memorial Hermann, said it expected to receive doses of a different monoclonal antibody therapy this week and hoped to start administering it “as soon as possible.”

“This MCA treatment has been shown to be more effective against the omicron variant, which is now the dominant strain in our region and across the country, accounting for more than 80 percent of cases locally,” the health system said in a statement.

Politically, Abbott is in a somewhat different situation than the last time Texas dealt with a rise in cases. He now has a serious Democratic challenger in Beto O’Rourke, who announced his campaign in November and has focused on the pandemic in his first stops — meeting with the Hidalgo County health authority in his first weeks as a candidate.


O’Rourke has offered a black-and-white contrast with Abbott: He has said he would allow schools and businesses to require masks and vaccines. At the same time, he has suggested taking an understanding approach to those resistant to the vaccine, saying they should not be judged because it “pushes them into a corner.”

Still, O’Rourke sees a lack of leadership from Abbott when it comes to the pandemic.

“First Abbott flip-flopped on public health guidelines and then he stopped schools, local governments and businesses from protecting our fellow Texans,” O’Rourke said in a statement for this story, alluding to Abbott’s reversal on letting private employers require vaccines for their workers. “The least he can do is get out of the way and allow those who are focused on preventing more Covid hospitalizations and deaths to do their jobs.”

On his right, Abbott continues to face pressure to not bow to demands to be more aggressive in fighting the pandemic. In fact, when it comes to vaccine requirements, dozens of Republican state lawmakers believe he has not done enough to outlaw them and want him to call a special session to codify his executive order.

“Of course I’m considering it, but people need to go through the legal analysis here,” Abbott told a radio interviewer Tuesday. He explained that the issue of federal vaccine mandates is headed to the U.S. Supreme Court and if the court upholds them, a state law passed during a special session would be unable to overrule the court. If the court strikes down the mandates, he said, then his executive order is the law of the land and no special session is necessary.

Abbott’s primary challengers agree that government should stay out of Texans’ lives with regard to the pandemic. One of them, Don Huffines, is openly against the vaccine, repeatedly boasting on Twitter that he has “never had the vaccine” and is “not taking the vaccine.”

Allen West, the former Texas GOP chair who is running against Abbott, became infected with COVID-19 in the fall while unvaccinated, and he recovered with the aid of monoclonal antibody therapy.

“Texans have options and should not be relegated to politicized mandates and dictated remedies for their own bodies,” West said in a statement.