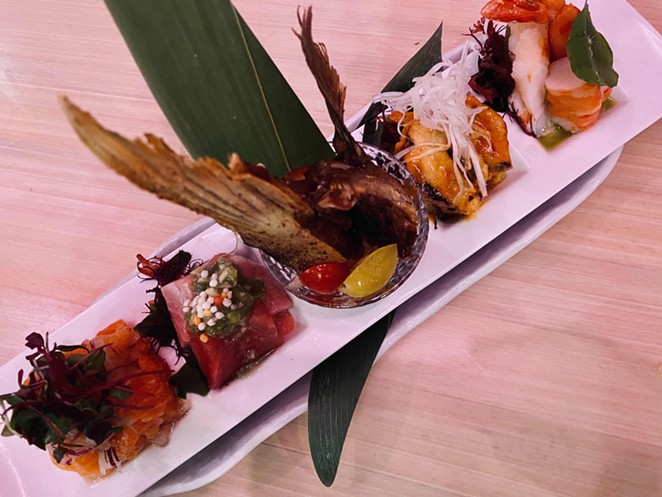 Ron Bechtol
Shiro excels by having a unique variety of sushi on offer.
There’s a good chance you’ve heard the proverb “In the Land of the Blind, the one-eyed man is king.”

In various forms, the observation has reportedly been around for centuries. In our current era, when sushi is so ubiquitous it can be found in supermarkets and service stations, I can’t help but think the same of the Japanese fish preparation.

The least bit of effort in sourcing and artistry becomes revelatory.

There’s more than a little effort being expended on sushi at Shiro, a newish Japanese restaurant located on Jones Avenue at the San Antonio River. If you’re looking for a traditional sushi setting with its central shrine of raw seafood displayed like so many religious relics, this is definitely not it. The place is bathed in pink neon and enlivened by distinctively Western music. The aromas that greet you upon breaching the entry flags may be of fried garlic or mushrooms crisping over charcoal.

And yet the sushi that will eventually arrive, not necessarily first as one might imagine, will be reassuringly fresh, beautifully carved and artfully perched atop just-sticky-enough rice. It won’t need, nor does it want, slatherings of fiery green wasabi or dunking in overbearing soy sauce — though a bottle is at the ready for the unconvinced. Your full attention is all that’s required for garnish.

The menu of nigiri — fish served on rice — and sashimi — served without — will change according to seasonal availability, as it should. On various visits, I’ve had and liked King salmon, flounder, the daunting geoduck clam — that’s pronounced “gooey” duck — and lightly seared Spanish mackerel.

A belted strip of cooked eel over rice was the essence of umami, as was pillowy, golden sea urchin girdled with nori. Monkfish liver pâté, a first for me on local menus, smacked of foie gras in both taste and texture. The only disappointment among the lot was a nigiri serving of red sea bream so translucent as to nearly disappear and so delicate as to have almost no taste. But perhaps a finer palate might be able to prize out its virtues.

Shiro offers three “from kitchen” plates, both chicken and beef teriyaki and charcoal grilled Chilean sea bass, but the specialties section was just too appealing to go down those more conventional routes. The seared sea scallop with sake-soy beurre blanc was a dud due to overcooking of the scallop — charcoal-seared tuna fared far better. But the sauce, a variation of which is used on several dishes, was both versatile and very good.

Charcoal-grilled tiger shrimp were an unequivocal hit with their plate mates of equally charcoaled asparagus and oyster mushrooms, all wreathed in a ring of kabocha squash purée. On another plate, those grilled oyster mushrooms, fire-crisp and earthy, almost stole the show from the carefully tailored but lukewarm slices of Prime New York strip in the pan-seared beef tataki. An aromatic Chinon from the better-than-you-might-think wine list was a natural companion to the beef.

You won’t have any real say in what order dishes arrive at Shiro, but a fitting end to any meal would be the sashimi “tapas,” five different seafood treatments, each with its own accompaniments. Our handsome selection included Bluefin and albacore tunas, deep-fried Hamachi collar, salmon and shrimp.

Add a glass of gently sparkling sake from the list that deserves its own exploration, and you’ll never miss dessert.

The skinny: Shiro excels by having a unique variety of sushi on offer — monkfish liver pâté and geoduck clam, for example. Raw seafood is beautifully handled and presented with minimal fuss. For the most part, it needs no adulteration with wasabi or soy sauce. The extensive use of charcoal searing of meats, seafood, vegetables and exotic mushrooms is both unconventional and welcome. Garlic pervades many dishes — also a welcome factor. The sake list begs to be explored, but the wine list is also unexpectedly ample and numerous enticing Japanese beers are on offer. Dedicated parking is available in the adjacent garage.