His name was Hendrix.

The maroon-hued cinnamon clownfish was the longest survivor of Jedidiah Reed’s saltwater aquarium. Hendrix had become a mascot of sorts for Jedi, as friends call him, and his young shop, Element Tattoo off Fredericksburg.

Then the fire. Old, overloaded electrical wiring blew an outlet one night in 2009 and started a blaze around the tank. It got so hot, the aquarium exploded and smothered the fire before it could take the whole building.

Reed’s small stable of artists were jettisoned to other friends’ shops for about a year while they rebuilt. And they honored Hendrix just how you’d expect – each got a clownfish tattoo.

While the Texas Department of State Health Services has licensed more than 100 tattoo studios in and around San Antonio, Reed is one of the latest in a line of tattooers pushing skin art to new heights in South Texas. Decades before Reed opened up Element, which has since grown to house about a dozen of the best artists in the city, tattoo legend Bob Moreau put South Texas on the flesh-decor map when he opened Perfection Tattoo here in the mid-1980s. “Doctor Bob,” as people called him, went on to teach prominent artists like Chris Treviño, Shawn DeGan and Troy Curry and helped forge what aficionados across the globe call the Texas Style, a wild Americana marked by bright blues, lime greens, pinks and purples – like Americana gone nuclear. 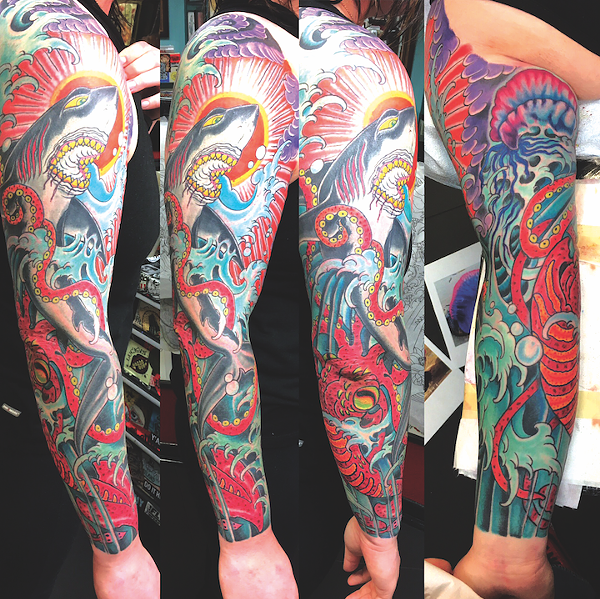 Reed grew up and learned how to tattoo in Corpus Christi under another Texas skin-art legend, Bruce Edwards, and describes his own style as “modern classic.” It’s a style he’s needled into numerous clients as multiple-session bodysuits and back pieces – the kind of massive, traditional Japanese-inspired movements Reed’s perhaps most known for. Last year, he says he started 27 back pieces – which can cost anywhere between $18,000 to $20,000 and generally take an average of 50 hours in the chair. Which makes it a bonding experience between tattooer and tattooed, Reed says.

Such is the case with Craig, who’s been going to Element for several years to finish what started as a shoulder piece, then grew into a full-back tattoo, and then added sleeves, front panels, and now leg work. Craig, a local business-owner who builds home theater systems for a living, doesn’t necessarily look like the Yakuza-style bodysuit type; he didn’t even start on the project until age 45.

But on a recent Friday, Craig stood in Reed’s studio, naked except for sheared boxer-briefs, as the artist stenciled a coy-dragon-octopus battle scene on his left buttock. His ink-covered skin now tells numerous stories. On his back, there’s a rooster that represents his brother tussling with a snake, which represents Craig, over a mouse in the center – which represents Craig’s brother, who died at age 4 from Leukemia. On his left arm, there’s a dragon (his daughter) biting the tail of an ox (his son) which is poking a monkey (Craig’s wife) that’s strangling a snake (Craig). Ashes from his beloved pets were mixed into black ink to write their names on coins that dot his right arm. He says he wishes he had more skin for more stories.

“The only regret I have is that I’m not bigger and I don’t have more skin,” he tells Reed.

Even with his success, Reed still hustles as hard as when he was a young man learning the trade. The shop is in such demand that some days, by the time it opens at noon, walk-ins are already swarming the front desk – which Reed’s mother helps him manage. Reed usually shows up a of couple hours before the shop opens to knock out a session before the place wakes up.

While an established artist like Reed, who can command top-dollar for his work, could isolate himself in a private studio and only take the clients he wants, he cherishes walk-ins and tries to do at least a couple every week. “It’s the root of tattooing,” he says. “I gotta keep meeting new people, new faces, new ideas, new things.”

Still, walk-ins can be a tricky thing. On one recent day inside the shop, a would-be customer walked in with some vague design ideas wanting some coverup work. When he asked for a good price, Reed’s response: “I don’t do good prices, I do good tattoos.” At one point, the guy said something about wanting some sort of blue tattoo on his right arm – that’s all Reed could get out of him.

“Why would you get something on your body for the rest of your life if you don’t know what the fuck you want?” Reed asked. Then he told the guy what he tells most customers: “I’m just trying to get you the best tattoo that you can get.”

As Reed puts it, successful artists are the ones who can veer in and out of right- and left-brain thinking – the technical skill needed to apply clean lines, solid shading, and color that will last, while at the same time creating and sketching and developing a personal style. Style and tone – or what you might call the artist’s chair-side manner.

Reed says he loves the feel of an old school shop, where artists worked with their shirts off so customers could read them like a billboard. Sometimes Reed works shirtless so his clients can read his skin. Other times, he says, it’s for more practical reasons. “This is a blood-letting ritual,” he says. “Sometimes I don’t want their fucking blood on my brand-new shirt.”