Both the band and the venue deserve credit for the successful maiden voyage.

San Antonio’s new $70 million Tech Port Center + Arena welcomed '90s rock act Smashing Pumpkins on Monday for a maiden voyage that owed its success both to the band's performance and the venue itself.

The sold-out show marked LA-based venue-management giant ASM Global’s first foray into the Alamo City market, and — aside from a few minor parking, ticket and sound snafus — the night was steeped in magic.

During Smashing Pumpkins' set, frontman Billy Corgan noted the show was the band's first in “a long, long time.” Even so, the performance crackled with energy and attitude. To concertgoers' delight and surprise, the group played a mix of old and new, along with some deep cuts and an otherworldly, slightly creepy interpretation of the Talking Heads’ “Once in a Lifetime.”

Perhaps because the Pumpkins are notorious for not playing older tracks live, it was obvious fans were thrilled to hear hits including “Thirty-Three,” “Bullet With Butterfly Wings” and “1979.” 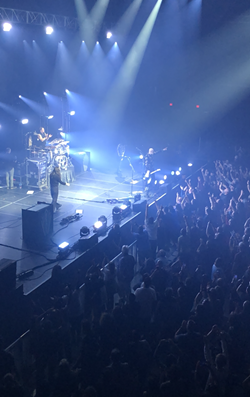 The Colorado-based Velveteers blazed through an opening set of primal rock with a theatrical flair.

As for the venue itself, the 3,200-seat Tech Port Center feels much smaller than it is — in a good way. Though packed, the arena offered an intimate atmosphere that made the show feel personal. From an efficiency standpoint, the venue makes smart use of its layout, which aims to accommodate esports events on massive livestream screens.

After getting a quick look at the arena's inner workings via a clandestine tour, it’s clear the developers are serious about bringing top acts like the Smashing Pumpkins to the city’s South Side. Ample loading space for large tour vehicles and curbside tour bus accommodations are just a couple of amenities that older, downtown venues can’t offer.

The onsite food court, which houses satellite locations of local concepts such as Kuriya,  La Tienda de Birria and The Big Bib BBQ, is smartly situated around Tech Pour, a bar that offers beer, wine and spirits. Opening night's themed cocktail was dubbed 1979 in honor of the Smashing Pumpkins hit.

On the whole, Tech Port Arena isn't a pretty facility. The entertainment is the star here, not the building. And that's not intended as a knock. Just be aware that this place is designed for folks to really fucking enjoy what they’re there to do — whether it be online gaming or watching Billy Corgan cop Jimi Hendrix's move of picking the guitar with his teeth — rather than marvel at architectural details.

Opening night for any facility is a monstrous undertaking, but the staff were patient and accommodating, and aside from the above-mentioned hiccups, the show unfolded smoothly as could be expected. One recalls Jurassic Park’s John Hammond spouting, “We’ve spared no expense,” when eyeing lighting rigs that cost upwards of $8,000 apiece and the sound technician’s massive board, lit up like a Christmas tree.

If Monday's debut event is any indication, the Smashing Pumpkins will just be one of many top touring acts eager to slide into Tech Port Arena. Future headliners include rapper Kevin Gates and alt-metal group Papa Roach, both slated to appear at at the venue in May.