Artists and musicians from across the world usually try to get as much mileage as they can out of an appearance at South by Southwest. Meaning, even for bands booked on an official showcase, some will still commit the official no-no of performing at any number unofficial, non-SXSW-sanctioned showcases that'll be buzzing around Austin later this month.

For most acts, the consequences of getting caught are, at best, annoying — SXSW will cancel your hotel arrangements and revoke your festival badges. International artists, however, can apparently expect a much more frightening penalty — immigration agents, deportation, even a possible ban from the country.


Felix Walworth — who plays in bands like Told Slant, Eskimeaux, and Bellows — first sounded the alarm today, as first noted by A.V. Club, tweeting out a screenshot of the contract artists must sign in order to play an official SXSW showcase. Per the contract: “Accepting and performing at any non-sanctioned events may result in immediate deportation, revoked passport, and denied entry by US Customs Border Patrol at US points of entry.”

Not only did Walworth say Told Slant will not perform its scheduled showcase, the band is urging other acts to cancel their showcases — basically, a SXSW boycott.


Can our first step toward coalition as artists with radical politics be to cancel all our official showcases at sxsw? I'm serious just do it


No response yet from festival organizers, but the contract excerpt Walworth posted appears to be legit. We received a separate copy of the contract from another artist and here's what it says: 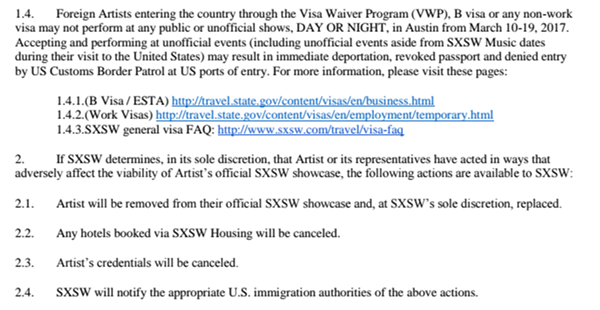 This afternoon we got a lengthy statement from Ronald Swenson, SXSW CEO and co-founder, calling Weldon’s concerns “a misunderstanding” and saying he’s sorry to learn that a performer has canceled.

He goes on to defend the contract, which he says has contained the language in question “for many years.” First, he characterizes it as a fair warning for artists about “the likely repercussions” of violating U.S. immigration law; second, he says the language in the contract “is, and always was intended to be, a safeguard to provide SXSW with a means to respond to an act that does something truly egregious, such as disobeying our rules about pyrotechnics on stage, starting a brawl in a club, or causing serious safety issues.”

The statement does not address what seems to be at the heart of Told Slant’s protest and calls for a boycott – that SXSW would consider breaking festival rules reason enough to “notify the appropriate U.S. immigration authorities.”

SXSW has been vocal in its opposition to President Trump’s Travel Ban and is working hard to build a coalition of attorneys to assist artists with issues at U.S. ports of entry during the event. We have artists from 62 countries from around the world performing and have always supported our international music community. We have never reported international showcasing artists to immigration authorities.

We were sorry to learn that one of our invited performers chose to cancel his performance at this year’s SXSW Music Festival due to a misunderstanding of our policies regarding international artists.

We understand that given the current political climate surrounding immigration, the language that was published seems strong. Violating U.S. immigration law has always carried potentially severe consequences, and we would be remiss not to warn our participating acts of the likely repercussions.

Language governing SXSW’s ability to protect a showcase has been in the artist Performance Agreement for many years. It is, and always was intended to be, a safeguard to provide SXSW with a means to respond to an act that does something truly egregious, such as disobeying our rules about pyrotechnics on stage, starting a brawl in a club, or causing serious safety issues.

If SXSW determines, in its sole discretion, that Artist or its representatives have acted in ways that adversely affect the viability of Artist’s official SXSW showcase, the following actions are available to SXSW:
○ Artist will be removed from their official SXSW showcase     and, at SXSW’s sole option, replaced.
○ Any hotels booked via SXSW Housing will be canceled.
○ Artist’s credentials will be canceled.
○ SXSW will notify the appropriate U.S. immigration authorities of the above actions.


We hope never to be put in the position to act on this. Indeed, we spend a great deal of time communicating with international artists concerning numerous issues, including how to avoid issues at U.S. ports of entry.

As such, both to protect SXSW and the interests of all the participating artists, we long ago added this language to our Performance Agreement:

1.4. Foreign Artists entering the country through the Visa Waiver Program (VWP), B visa or any non-work visa may not perform at any public or unofficial shows, DAY OR NIGHT, in Austin from March 10-19, 2017. Accepting and performing at unofficial events (including unofficial events aside from SXSW Music dates during their visit to the United States) may result in immediate deportation, revoked passport and denied entry by US Customs Border Patrol at US ports of entry. For more information, please visit these pages: